a look back: leon wildes pens letter to the editor of the new york times

A Look Back: Leon Wildes Pens Letter to The Editor of the New York Times Regarding Workings of The Immigration Law and Receives Response from District Director Sol Marks, circa 1972. 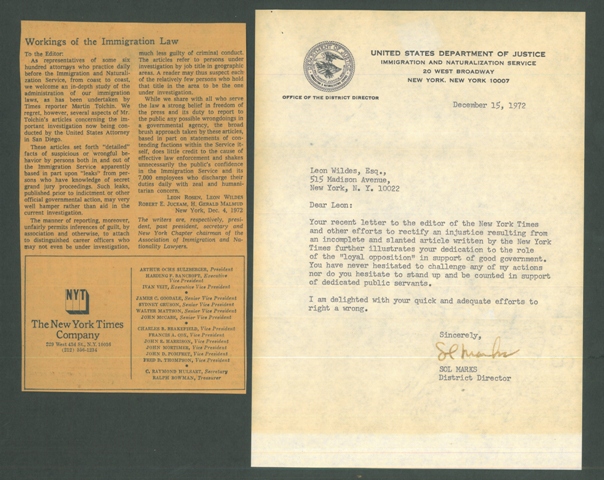 Leon Wildes, Founding and Senior Partner of Wildes & Weinberg, P.C., began his intense study and practice of immigration law in 1960 as a migrations specialist at the Hebrew Immigrant Aid Society (HIAS) and has practiced immigration law ever since.

Wildes was also an Adjunct Professor of Immigration Law at the Benjamin N. Cardozo School of Law for over 32 years.  In addition, he supervised the immigration externship program.

Leon Wildes remains committed to serving his clients and country with the utmost respect and professionalism. What was true in 1972 and so eloquently referred to by Sol Marks at that time remains true today: “You have never hesitated to challenge any of my actions nor do you hesitate to stand up and be counted in support of dedicated public servants.”

Wildes & Weinberg, was founded in 1960 by Leon Wildes, who is best known for his successful representation of former Beatle John Lennon in his deportation proceedings, the circumstances of which inspired legislation, documentaries, and books. As a niche firm, the multi-lingual staff of Wildes & Weinberg, has experience in all areas of U.S. Immigration law including:  employment and investment-based immigration, work permits, permanent residence for qualified individuals, family-based immigration, asylum applications, all temporary and permanent type visas, naturalization, and Form I-9 compliance. With Mr. Wildes still at the helm, Wildes & Weinberg continues to service the immigration needs of prominent American and International corporations, banks, industrial, financial and manufacturing concerns, as well as law firms in connection with the personnel requirements of their foreign national employees.  Despite difficulties currently being encountered in dealing with U.S. immigration authorities, the firm has maintained an extraordinary track record for success in its cases.

To learn more about Leon Wildes, the Lennon case, or Wildes & Weinberg, contact Managing Partner Michael Wildes at michael@wildeslaw.com  to schedule a consultation or for media inquiries.