another victorious resolution to a five year long deportation battle

Managing Partner Michael Wildes and the firm of Wildes and Weinberg is proud to announce that it has secured relief for long-time Broadway star Gerard “Gerry” McIntyre before the New York Immigration Court.  September 2019.

A native of Grenada, Gerry has been involved in numerous high-profile theatre productions, including the original Broadway production of Uptown … It’s Hot!(1986), Anything Goes (1987), and Joseph and the Amazing Technicolor Dreamcoat (1993) in which he played the starring role of Judah.  More recently, he has also served as a Choreographer for the hit spoof production, Spamilton, as well as the soon-to-be released Forbidden Broadway: The Next Generation, opening next month.

Tragically, due to a minor criminal issue, Mr. McIntyre was stopped by border officers in 2014, leading to a five-year long deportation battle.  Wildes and Weinberg ended that battle on September 16, 2019, with Immigration Judge Samuel Factor granting our request for relief before dozens of Gerry’s closest friends and family members.

According to Michael, “We are honored to bring closure to Gerry and his family.” 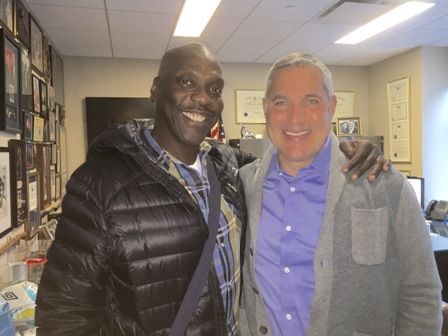 Michael, through his work as an immigration attorney helps individuals  and artists of all genre’s actualize their ability to live and work in America. His firm, Wildes & Weinberg, P.C. was founded in 1960 by Michael’s father, Leon Wildes, whose best-known accomplishment was his successful representation of John Lennon in his widely publicized deportation proceedings (also a five year long battle!), the circumstances of which have inspired several films and documentaries. The firm specializes exclusively in the practice of U.S. immigration and nationality law, has a distinguished domestic and international clientele, and can assist with any type of immigration matter including employment and investment-based immigration, work permits, permanent residence for qualified individuals, family-based immigration, asylum applications, all temporary and permanent type visas, and U.S. citizenship.