Managing Partner Michael Wildes is pleased to announce that Wildes & Weinberg has secured an E-2 treaty investor visa classification on behalf of Sara Maule, an Italian National,  for the purpose of serving in the key specialist position of Italian Brand Manager for Frederick Wildman & Sons Limited,  an importer of fine wines and spirits based in New York City since 1934.

Sara had this to say about her long immigration history:

“Thanks to Michael Wildes and his team, I finally can stay and work in the United States. It was a difficult path and it took more than 4 years because my VISA was previously denied in November 2014. My father is a renowned winemaker in the Italy and I have spent my entire life next to him, trying to learn as much as I could and developing my personal skills. I’ve always loved the United State; traveling and connecting with people, and trying to transmit what there is behind every single bottle of wine. It’s not just “fortune” to produce a unique wine, it’s strong passion, knowledge, and hard work. To gain more attention to this, I started to write articles, to take lessons and to give lessons, in Italy as well as in the United States. The importer of my father’s wine was highly interested in having me join their team, as a result of my Italian background and passion. I applied first to get an H1 Visa, without success. After, I applied for a J1 VISA. I was quite astonished when that was denied. Nobody could believe it; it seemed impossible, but it happened for real, to me. I thought I would never be able to come back to the United States again. I felt so much pain.

Fortunately, I had the chance to be introduced to Michael Wildes and his team. Thanks to them I obtained an E2 VISA and I can now work in the United States, realizing my dreams. Of course, I will likely contact them again to apply for the Green Card in the future.” 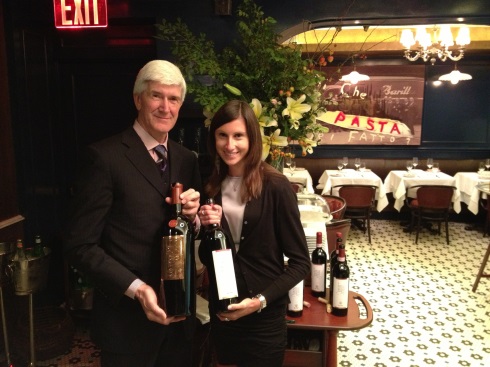 In addition to running a highly successful immigration law practice, Michael is also of counsel to Lincoln Center for the Performing Arts and two international/corporate law firms. A former Federal Prosecutor with the United States Attorney’s Office in Brooklyn (1989-1993), Michael has testified on Capitol Hill in connection with anti-terrorism legislation, and is a frequent participant on professional panels and commentator on network television and radio with regard to US immigration law, employer sanction work and compliance. He is internationally renowned for his successful representation of distinguished individuals and corporate clients such as performing artists, directors, writers, models, actors/actresses, athletes, race car drivers, fine artists, art dealers, curators, musicians, and literary agents. Some of the firm’s recent clients include famed artist Sarah Brightman, several Miss Universe winners as well as soccer icon Pele and Chef Jean-Georges.

Michael, the author of Safe Haven in America: Battles to Open the Golden Door, was recently reelected in a landslide victory to serve a third term as the Mayor of Englewood, New Jersey, was appointed to the District Appeals Board of the Selective Service System for the State of New Jersey, was a member of the New Jersey Governor’s Blue Panel on Immigration, and is currently an Adjunct Professor of Business Immigration Law at the Benjamin N. Cardozo School of Law.

For more information on the E-2 visa or any other visa category, please visit our Immigration 101 page or contact Michael Wildes at michael@wildeslaw.com.