U.S. Customs and Border Protection has announced that, as of April 26, 2013, it will no longer be issuing paper Form I-94s (Arrival/Departure Record) to most nonimmigrants entering the United States by air or sea.

Instead, CBP will provide each traveler with an admission stamp in their passport showing the date of admission, class of admission, and expiration date.

individuals who normally go through secondary inspection, such as asylees, refugees, and parolees, will be provided a paper copy of Form I-94 by a CBP officer. Also, individuals entering the U.S. through a land border will still be issued a paper Form I-94.

A copy of the electronic Arrival/Departure Record can be obtained online at www.cbp.gov/I94. The record will look like this and will be considered acceptable for employment eligibility verification purposes: 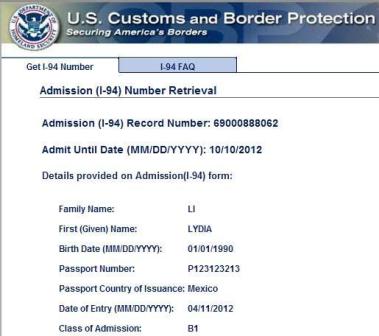