Syed Rizvi, proprietor of Ice Cream on Grand, and well-known philanthropic gentleman is always willing to offer a helping hand to those in need and does so with an infectious smile. Yet Mr. Rizvi’s life was not always a happy one. After receiving bad immigration advice, Mr. Rizvi was removed from the United States in June 2009 despite being married for over 14 years to Victoria Rizvi, a U.S. Citizen. Devastated by his removal, the couple hired Michael Wildes and the firm of Wildes & Weinberg to attempt to bring Syed back to the United States, back to the woman he loved, and back to the ice cream store where his presence was known by all. After obtaining approvals on all of the necessary applications and waivers from the United States Citizenship and Immigration Services (USCIS) and the United States Department of State, Mr. Rizvi was allowed to return to the United States in October 2010. When Syed entered, he did so as a Lawful Permanent Resident based upon his marriage to Victoria. Three years later, Syed was able to apply for naturalization and became a United States Citizen under the provision of law which allows spouses of U.S. citizens to apply for this benefit if they have been a green card holder for at least three years, have been living in marital union with the same U.S. citizen spouse during such time, and meet certain other eligibility requirements set forth in the Immigration and Nationality Act.

In his capacity as the former Mayor of Englewood, New Jersey, and a father of four children, Michael Wildes is a loyal customer of Ice Cream on Grand, having shared many ice cream sundaes with Syed and Victoria. “I am so happy that Syed’s long and arduous immigration battle has seen a successful outcome and I look forward to the warmer weather when I can once again enjoy the excellent ice cream and service that has become synonymous with Syed and Ice Cream on Grand”.

This is not the first, nor will it be the last, difficult immigration matter that the firm has handled. In fact, Leon Wildes, who founded the firm in 1960 and is Michael’s father, is best known for his 1976 successful representation of former Beatle John Lennon and his wife Yoko Ono in their deportation proceedings.

Today, Wildes & Weinberg has expanded beyond its Madison Avenue office in New York City to include offices in Englewood, New Jersey and in Miami, Florida. The firm’s multi-lingual staff continues to be known for its prompt and efficient service and the hallmark of the law practice remains its individualized attention to its clients’ needs. 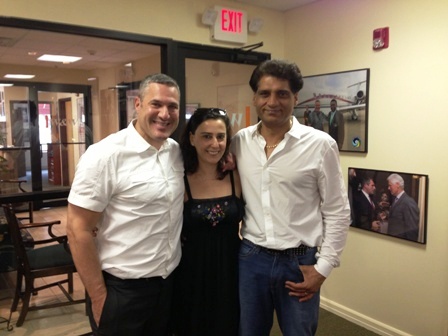