Managing Partner Michael Wildes, also Mayor of Englewood, New Jersey, congratulates Naftali Abenaim, a happy client and friend, on his swearing in as a newly minted citizen.  It was the firm’s pleasure and honor to assist Naftali with his U.S. immigration needs. Naftali is the CEO/Founder of Mocha Hospitality Group which owns Mocha Red, Mocha Burger, Mocha Burger Express, all in New York City, and Mocha Blue, in Teaneck, New Jersey.  In addition, Naftali is the President and Designer of Naftali Millinery, and has been creating hats for celebrities and individuals alike for nearly three decades. 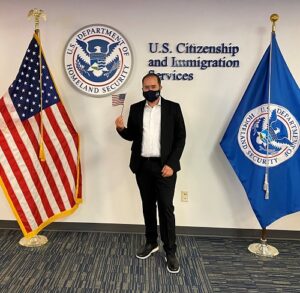