Managing Partner Michael Wildes is pleased to announce that Wildes & Weinberg P.C. has secured O-1 visa classification on behalf of Irina Chernova, a highly acclaimed international fashion model, based upon her extraordinary ability in the arts.

Ms. Chernova has garnered a distinguished international reputation as a model, having worked extensively in the major markets of Milan, Barcelona, Tokyo, London, and New York, among others. She has demonstrated her extraordinary ability by appearing in editorials for prestigious magazines such as Harper’s Bazaar Japan, Glamour Italia, Schon Magazine, Marie Claire USA, Dazed & Confused, and Inked Magazine USA. She has gained massive exposure from her appearances for major brands such as H&M, Urban Outfitters, Nasty Gal, and Maria Dora. She also made a special appearance for Playboy USA in the Diesel Calendar, photographed by prominent photographer Terry Richardson. These high profile assignments confirm her extraordinary reputation as a fashion model and have made her one of the most desired models today.  We look forward to seeing her continued success in the U.S.! 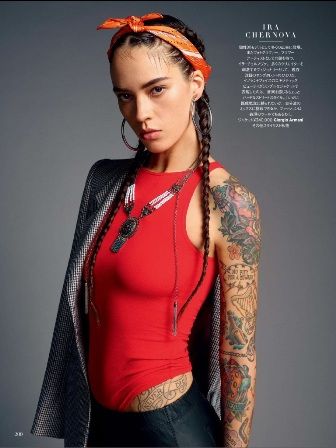