Managing Partner Michael Wildes is proud to announce the approval of the petition filed on behalf of celebrated tattoo artist Filip Fabian to secure him O-1 classification. October 2019.

Known for his rare watercolor tattoos, Filip Fabian is an extraordinarily talented tattoo artist who has become internationally known and renowned in his field. He is highly respected and has become a star for the beautiful watercolor designs that he creates and applies. Mr. Fabian has traveled the world, working as a tattoo artist at some of the most prestigious tattoo studios in Europe, Australia and other parts of the world, and his schedule is always filled with eager customers, in addition to long wait lists of those seeking appointments with him. 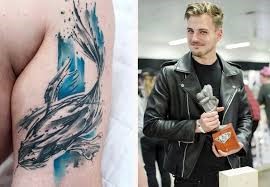