Managing Partner Michael Wildes is proud to announce the approval of the petition filed to secure O-1 classification for Kunal Sood who is an internationally acclaimed and world renowned Social Impact Strategist. 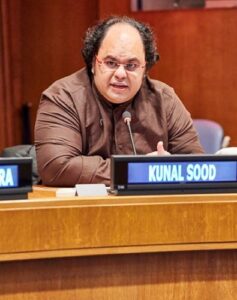 As an award winning disruptive innovator Kunal Sood is on a mission to make the impossible possible in the era of the Creator Economy. As the founder of X IMPACT GROUP, #WeThePlanet, NOVUS, X Fellows, and We The Future (WTF) he has made his life’s purpose to transform the world for a better future by positively impacting a billion lives in his lifetime. He does this by architecting and bridging the worlds of power and influence with meaning and purpose to build the next generation of purpose-driven leaders and organizations. He has a passion for designing and curating deeply immersive and transformational experiences that shapes culture and inspires people from all around the world to harness the power of collaboration in turning their ideas into real-world action and impact.

From working in the trenches of the slums in Mumbai with Harvard at PUKAR to building global movements with world leaders at the United Nations General Assembly in New York, Kunal began his impact journey as a Global Health scientist while training with UCSF one of the worlds best institutions after which he was the only one selected as co-principal investigator on a groundbreaking global health project with Harvard at PUKAR. Today he is building public-private partnerships with distinguished organizations like the UN, NASA, Facebook, Google, SAP, X Prize and many more. Kunal has hosted iconic leaders, explorers and artists like Prime Minister Modi, Anousheh Ansari, HRH Dr. Nisreen El Hashemite, Steve Forbes, Marc Benioff, Deepak Chopra and Sadhguru to shift the narrative around social innovation and impact in order to develop leaders of the future that can do build a better world.

Currently as the founder of We The Planet he is building out global campaigns #OperationHOPE, #FirstWoman and #WeHaveADream. At X Fellows he is creating the network of networks, which is a highly curated collective of extraordinary citizens including, artists, musicians, innovators and explorers that support all of the campaigns. #WeHaveADream is a social justice movement using music and storytellers to end all forms of social, racial, and environmental injustice on the Planet.

Over the past decade, Sood has convened over 50 high-level summits with the United Nations, including TEDx, NOVUS and SDG Innovation at the UN General Assembly to galvanize humanity through science, innovation and technology supporting the United Nations to achieve the 17 UN Sustainable Development Goals. Prior the global pandemic Sood partnered with the Office of the UN Secretary General and President of the UN General Assembly to curate and produce the first-ever SDG Youth Dialogue and SDG Moonshots Summit, which was his most recent initiative in partnership with the UAE Permanent Mission to the United Nations to democratize the 17 UN SDGs as humanity’s ultimate moonshot on earth declaring the next decade of Hope in Action.

As a pioneer in his field, Forbes named Sood as one of the world’s ‘Icons of Impact’ and honored him as a ‘Global Movement Builder.’ He is a TED Resident and serves as a Global Ambassador for the Non-Violence Project, Singularity University and OpenEXO.

Sood is the recipient of numerous awards and fellowships that include his work for being an impact entrepreneur as a force for good working in the field of social innovation, honoring him with their prestigious Metcalfe Prize at the 10th Anniversary at the annual Disruptor Awards (TDIA) Ceremony hosted during the Tribeca Film Festival in New York City. He is the recipient of the Media for Social Impact Award at the United Nations, World Innovation Award at SAP NextGen and Global Impact Award from NASA and NYSA at Google.

Sood has a life long love for learning having earned five master’s degrees including his M.B.A., from Kellogg-Northwestern, M.A., From CIIS, M.Sc., from UCSF and M.A.P.P./M.Phil., from the University of Pennsylvania. He also holds positions at Columbia University as an Innovation Fellow, Singularity University as a GSP Fellow, and at the Indian School of Business as an Executive Fellow. Sood serves on the advisory boards for Space For Humanity, 01 Ventures and Lottery.com. He leverages the exponential potential of modern-day technologies to solve the world’s most urgent and pressing problems. Sood started his career in the fashion and wellness industry in New York City 20 years ago after graduating from New School University’s prestigious Parsons School of Design.