Managing Partner Michael Wildes is honored to announce the approval of the petition filed to secure O-1 classification for international superstar, Craig David. 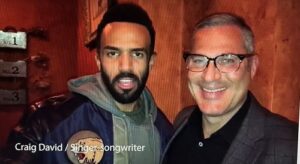 Mr. David is a prominent British singer and songwriter who rose to fame on his album “Born to Do It” and songs “7 Days”, “Rendezvous”, “Fill Me In”, “Rise & Fall”, “Re-Rewind”. He has 20 UK Top 40 singles, seven UK Top 40 albums, and has sold over 15,000,000 records worldwide as a solo artist. He has been nominated for fourteen Brit Awards: five times for Best British Male, and twice receiving a Grammy Nomination for Best Male Pop Vocal Performance. In total, he has earned 12 awards and 43 nominations from several prestigious award organizations. His music has also been streamed over 10 billion times!