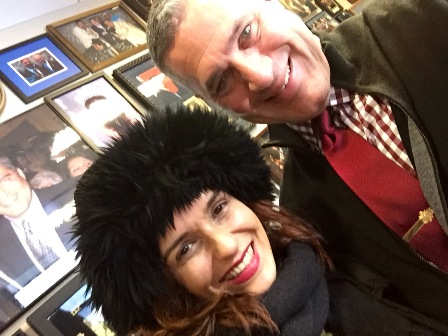 Born into a family of actors, writers and painters, Brazilian native, Vanessa Falabella, started performing as a child, doing commercials, voiceovers and jingles for Radio and TV, while listening to ‘mpb’, bossa nova, samba, jazz, funk and soul.  After high school, Ms. Falabella decided to study voice and English which lead her to combine her Brazilian musical skills with American culture and language and create something truly unique.  Thereafter, she completed a great number of recordings with great artists such as Gato Barbieri, Philippe Saisse, Sadao Watanabe, Cyro Baptista, Jason Miles, Will Lee, Eumir Deodato, Rick Braun as well as an EMI group project called Criara, with great filmscore producers Frank Ferrucci and Scott Lehrer.

Vanessa has since performed under the auspices of O-1 and P-3 visas at New York’s top venues including SOB’s, Town Hall, The Supper Club, Cafe Wha, Joe’s Pub, and Zinc Bar. She has performed and recorded with Marcus Viana, Cyro Baptista, The Rain Forest Band, César Camargo Mariano, Sadao Watanabe, Gato Barbieri, Hiram Bullock, among others.

She opened for Bob Dylan’s Brazilian Tour, performed at the Taste of Jazz Festival in Miami, and has traveled the world as a featured performer.

Ms. Falabella has entered the United States in the past in O-1 and P-3 status to perform with the most renowned musical stars, including Cryo Baptista, at the most world renowned venues such as:

In Brazil, she has recorded soundtracks for some of the famous Brazilian television “novelas” as well as commercials including a Brazilian presidential campaign.

Ms. Falabella has also garnered the attention of worldwide media for well over a decade, as her press spans from 1997 to the present and ranges from the New York Times, to the New York Post, to the Brasilians and the Brazilian publication, Guia de Perdizes, to name a few.

On receiving the news that her O-1 visa was approved, Ms. Falabella stated, ” I thank Michael Wildes and his staff for seeing my visa through. They did a great job and really know the music industry”.

An O visa is a classification of non-immigrant temporary worker visa granted by the United States to an alien “who possesses extraordinary ability in the sciences, arts, education, business, or athletics, or who has a demonstrated record of extraordinary achievement in the motion picture or television industry and has been recognized nationally or internationally for those achievements,” and to certain assistants and immediate family members of such aliens.

Over the past 54 years, Wildes & Weinberg, P.C. has concentrated its practice in all aspects of U.S. immigration and nationality law, servicing the immigration needs of prominent American and International firms, banks, industrial, financial and manufacturing concerns and law firms in connection with the personnel needs of their foreign national employees.