On a recent evening out for hair and beauty products, members of the firm came across an advertisement at Ulta Beauty, featuring the firm’s client, Andrew Fitzsimons, an internationally renowned hairstylist. 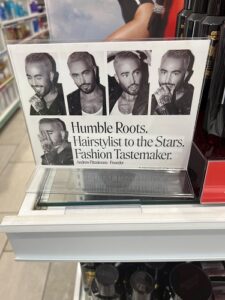 Mr. Fitzsimons is a renowned hairstylist from Ireland who has attained vast recognition for his extraordinary talent and skill. He has served as the brand ambassador for major beauty product lines and attracted celebrity clients as well as other high-profile professionals who seek out his skills to maintain their public image. Mr. Fitzsimons and his work have appeared in countless magazines, television shows, major events, fashion shows, and advertising campaigns throughout the world. It has been the Firm’s honor to work with and represent Mr. Fitzsimons and we wish him the best of luck with his namesake hair care brand that was launched at Ulta Beauty.