our representation of pro golfer collin and katherine zhu morikawa

Managing Partner Michael Wildes is pleased to announce that we represent Collin Morikawa and his lovely wife Katherine Zhu Morikawa. As recently announced, Collin and Katherine Zhu were married this past November. https://www.si.com/college/cal/other-sports/morikawa-marries 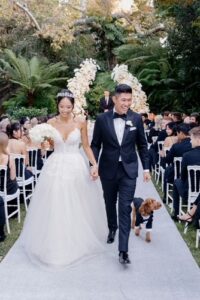 Collin Morikawa is an American professional golfer who plays on the PGA and European Tour.  He began his career with 22 consecutive made cuts,  second only to Tiger Woods’ 25 cut streak.   Collin has five PGA Tour wins – including two major championships,  the 2020 PGA championship and the 2021 Open championship, winning both on his debut.  In May 2018 Morikawa spent three weeks as the top-ranked golfer in the World Amateur Golf Ranking. He also became the first American to win the Race to Dubai on the European Tour.

It is our honor to represent Collin and Katherine and have them as clients of our firm.