our representation of tania stavreva, pianist

PICTURED WITH FOUNDING AND MANAGING PARTNERS LEON AND MICHAEL WILDES AT THE BOOK LAUNCH OF “JOHN LENNON VS. THE USA”  IS BULGARIAN BORN PIANIST TANIA STAVREVA, CLIENT OF THE FIRM 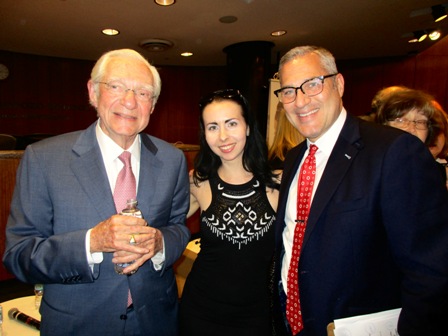 On September 7, 2016, the launch of  Leon Wildes superb new book “John Lennon vs. The USA” was held at the Benjamin Cardozo School of Law in New York City. See https://www.wildeslaw.com/index.php/news-events/events-and-outreach/1553-john-lennon-vs-the-usa-book-warming-event-held-at-cardozo-law

Attending the  warm and welcoming event was a mix of invited guests and  notables such as Lennon’s One-To-One Concert cohort Geraldo Rivera, long-time friend & photographer Bob Gruen, Fest for Beatles Fans founders Mark & Carol Lapidos, as well as many of the firm’s clients including, Tania Stavreva, a  Bulgarian born pianist (http://www.taniastavreva.com).

Leon and Michael (who wrote the book’s foreword) held a combination meet-and-greet and book signing prior to holding a roundtable conversation about the case.

The book, aptly titled “John Lennon vs. The USA”.,  is published by Ankerwycke Books, an imprint of ABA Publishing, a division of the American Bar Association and became available in August, 2016. It can be purchased on Amazon at: http://www.amazon.com/John-Lennon-vs-The-U-S-A/dp/1634254260.