Founding and Senior Partner Leon Wildes represented Flora Purim, a Brazilian jazz singer, as she fought her deportation case in the 1970’s.  Leon worked tirelessly to have her remain in the United States and Flora’s career flourished in America. 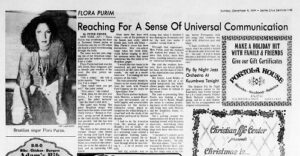