testimonial from a happy client: an american military serviceman

Managing Partner Michael Wildes is pleased to share this testimonial from a happy client whose wife finally returned to the United States after five years abroad. The case was taken over by Wildes & Weinberg, after the initial attorney failed to provide solid legal counsel. 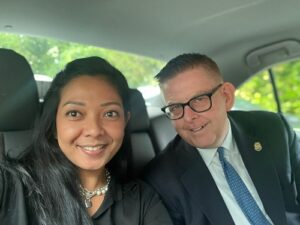 After three years of marriage, my wife went home to Bali, Indonesia, to care for her stroke-stricken father. We were warned that she should not leave the country, but we are told he was close to death, so there was no way we could not go to see him. The good news of sorts is that thanks to my wife’s devotion to her father’s well-being, he lived for another three-and-a-half more years, and she had the opportunity to repay his love and kindness to her.

The bad news is that when I returned to the U.S., and I began working to set up her return, I learned we had several problems.  We had not received important correspondence from USCIS that was mailed to our old address, and as a result, our case had been closed because of our failure to respond. In addition, I am an Army Reserve NCO, and when my wife left the country, I was on active duty, so when I returned home, I had no idea about the missing correspondence. My previous immigration lawyer made critical mistakes with our case. There are special provisions for military spouses going through the immigration process to request and be granted permission to leave the country and return without the worry of being stranded. My previous lawyer recommended against requesting these special provisions afforded to service members and it would end up  costing us almost five years of our lives.

The result was that my wife was subject to a 10-year ban from the country. My immigration lawyer told me we needed to apply for a waiver.  I told her I was going to look for a new lawyer.

Luckily for us, we found the expertise we desperately needed from Wildes & Weinberg. It was such a change of demeanor and purpose, that we put our full trust in them. From the start, my Wildes & Weinberg attorney mastered our case and our situation, and he even endured my own theory of the case.  We also worked with Belline, the paralegal assigned to our case, whose expertise is in advocacy and writing waivers.

The morning of July 29, 2022, five years after my wife left the U.S. to care for her father, she landed at Dulles Airport to begin our lives together again. It had been a long and nerve-wracking experience, but I recognize that from the moment we engaged Wildes & Weinberg, we were on the path to that joyful reunion next to the baggage carousel.

But what really impressed me was the level of care and personal attention Michael Wildes and his firm took to make sure my wife finally received her immigrant visa. After her waiver had been approved, when the time came for her to go to the U.S. embassy in Jakarta, her stress level was peaking because of the previous trauma she endured three years earlier when the previous attorney had handled our case, so poorly.  For my wife, just walking into the Embassy building made her extremely nervous.  This is when I realized we were working with a very special firm with special people. In the days before and after my wife’s appointment at the embassy, the Wildes Team fielded her frantic calls, coached her interaction with immigration officers and answered every question–sometimes the same question twice or three times, because she just needed to make sure and feel confident. The support from Wildes & Weinberg was otherworldly.

The last thing I’d like to emphasize is what working with Wildes & Weinberg means to me as a serviceman. When I went on active duty for 10 months in 2021, the team at Wildes & Weinberg always kept me up-to-date and connected to the case as it progressed.  I have spent more than 30 years in active and reserve military service. I served in the Coast Guard, and in the Army Reserve, mobilizing four times, including 15 months in Iraq. Throughout these three decades, I have been happy and grateful for every minute I have been in uniform, and the only thing I have ever asked from the government is to allow my wife to come back to the U.S. so that we could live the rest of our lives together. For all the time my wife was gone, even though I visited her in Indonesia, I was plagued by an intense fear that something could happen to me before she was allowed to return to the United States, and she would not be there for that moment.

Like all other veterans, when I pass, someone at the grave will be presented with the American flag that draped my coffin that the soldiers will fold in a triangle to be presented to that someone. My someone is my wife, Mira.  Now, she is back–because of the excellent work of our team at Wildes & Weinberg.

My only advice to someone with an immigration issue is to contact Michael Wildes at Wildes & Weinberg–early and often–and then, thank me in your prayers!