Managing Partner Michael Wildes is pleased to announce that Wildes & Weinberg P.C. has secured TN classification on behalf of Ms. Allison Pytlak in order for her to fulfill her role with The Women’s International League for Peace and Freedom.

The Women’s International League for Peace and Freedom (WILPF) is an international non-governmental organization with national sections covering every continent, an International Secretariat based in Geneva and a New York office focused on the work of the United Nations. WILPF is also a steering group member of the International Campaign to Abolish Nuclear Weapons (ICAN), which is the group that won the 2017 Nobel Peace Prize for its advocacy against nuclear weapons and raising awareness about their catastrophic humanitarian consequences.  Since its establishment in 1915, WILPF has brought together women from around the world who are united in working for peace by non-violent means and promoting political, economic and social justice for all. Ms. Pytlak will be engaged by WILPF to provide management consultant services with regard to the activities of the organization’s Reaching Critical Will (RCW) programme. Reaching Critical Will was established in 1999 to maximize WILPF’s efforts in the area of disarmament and arms control. At present, nine countries possess over 15,800 nuclear weapons, global military expenditure is over 1.7 trillion USD per year, and at least 1,500 people are killed every day by armed conflict and armed violence. Ms. Pytlak brings to the position a Masters Degree of International Relations from the City University of New York, numerous years of professional experience as a Management Consultant with similar organizations working toward universal disarmament and world peace. 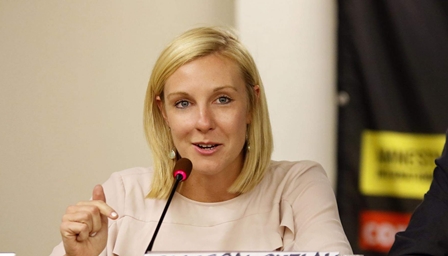 More than fifty eight years since its inception, the firm continues to serve a distinguished domestic and international clientele and covers all areas of U.S. immigration law, including employment and investment-based immigration, work permits, permanent residence for qualified individuals, family-based immigration, asylum application, all temporary and permanent-type visas, naturalization, and Form I-9 compliance. Today, the firm has offices in New York City, Englewood, New Jersey, Miami, Florida and by appointment in  Los Angeles, California.

For more information on Wildes & Weinberg, please contact michael@wildeslaw.com to schedule a consultation.