Twitch, the colossal live streaming video service owned by Amazon, has become somewhat of a hub for gamers, content creators, influencers, and average citizens alike. Whether its to observe an esports competition or someone just hanging out, millions of individuals tune in to various Twitch channels and live streams every day. Some streamers are well-known for their skills in specific games, such as Fortnite, Call of Duty, or League of Legends, while others are more renown for their reactions or impressions, ability to create music, or even their cooking skills. Despite what the streamer’s abilities may be, one thing is constant across all channels: each successful streamer is able to create a community and an experience that keeps the viewers coming back.

What may seem like a hobby is, in fact, a high paying job that has shifted people’s careers around. After all, once a streamer hits certain metrics, they are eligible for the Twitch Affiliate or Twitch Partner program, whereby they may be able to earn substantial revenue for each subscription earned, advertisement aired, bit (or emote) purchased, or donation received. Otherwise stated, a streamer who meets the requisite metrics can make money by streaming on Twitch, thereby altering their actions from simply sharing their experiences to actual work, as receiving monetary compensation for their actions is, unambiguously, the definition of work itself. However, it goes beyond simple revenue, as some of the top streamers, such as Ninja, Tfue, and Nickmercs, have been fortunate to earn millions of dollars from streaming alone. Naturally, because of the sheer amount of money involved, Twitch has continued to expand exponentially and appears to be growing everyday all over the world.

Despite being a global phenom, Twitch streamers often reside in close proximity to each other, similar to the way other industries operate, such as tech giants relocating to Silicon Valley. Besides the advantage of being in an environment with like-minded individuals, it grants streamers the opportunity to collaborate with each other, create content together, and stream together. One such center that is increasingly growing, for example, is Austin, Texas, where many streamers and Twitch-based organizations operate. However, like any other industry, prior to moving to the United States and working therein, it’s crucial that any foreign individual or business ensure they are not running afoul of any U.S. immigration laws, otherwise they risk civil or criminal fines, a bar to re-entering the United States, or perhaps, even deportation.

Unfortunately, most streamers often overlook this notion, and many enter the United States as visitors, stream on Twitch, and earn money for doing so, without first seeking the proper work authorization or visa. This occurs mostly because many people fail to conceptualize that streaming on Twitch is likely considered working, even if you’re just streaming yourself playing Fortnite or doing an IRL (in real life) stream while walking through Manhattan’s concrete jungle. Therefore, it’s vital that all foreign streamers who are coming to the United States plan in advance to avoid any risks.

As an example of what is attainable, one form of temporary work authorization that a streamer can petition for is an O-1B visa. The O-1B visa is a temporary, nonimmigrant endorsement that permits foreigners to work in the United States for up to three years at a time. Receiving an O-1B visa includes having an offer of employment in the United States (or several offers of employment from multiple sources, along with a third-party Agent) and convincing U.S. immigration officials at the United States Citizenship and Immigration Service (USCIS) within the Department of Homeland Security that you are a person of ‘extraordinary ability’ in the arts. Showcasing that you have achieved a level of ‘extraordinary ability’ requires demonstrating that you meet certain criteria, such as being nationally or internationally recognized, attaining commercial success, and commanding higher renumeration than others in your field, to name a few. A streamer can validate these elements by, for example, providing articles written about them, letters recognizing them for their achievements by other experts in their field, and evidence of their high numbers of views, followers, and/or likes as compared to others.

The O-1B is a great option, but not every streamer will qualify as an individual of extraordinary ability, which has a very specific criteria laid out in the rules and regulations. Other streamers may qualify for other visas, such as a P-1 visa, that can be explored with an Immigration Lawyer. Regardless, streamers must start to take responsibility and plan ahead, so they don’t need to scramble when it may be too late. After all, Twitch streams are live streamed to the public, and an immigration officer from the Department of Homeland Security may very well be one of your viewers at any given moment.

If you have any questions regarding your eligibility to enter the United States and stream on Twitch, or anything else related to U.S.-bound immigration law, please visit Wildes & Weinberg’s website, www.wildeslaw.com, or contact josh@wildeslaw.com. 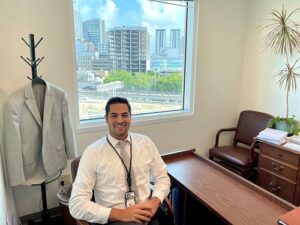 Wildes & Weinberg P.C., perhaps the United States’ premier law firm concentrating in the immigration and nationality field, was established by Leon Wildes, in 1960, who is best known for his successful representation of   John Lennon in his immigration deportation proceedings. Leon’s son, Michael Wildes, is now the firm’s Managing Partner and a Former Federal Prosecutor, as well as the mayor of Englewood, New Jersey. His representation has included soccer icon Pele, supermodel Gisele Bundchen, renowned chef Jean Georges, singer-songwriter Boy George, and many more. Still, the firm treats all their clients with the same respect and fights for their rights with tenacity, scholarship, and experience, regardless of their notoriety. Michael’s son, and Leon’s grandson, Josh Wildes, is a third-generation immigration attorney in the firm,  who previously served as an Attorney Advisor in the Department of Justice’s Executive office for Immigration Review prior to joining the practice. Josh’s client base includes various Influencers, esports professionals, and streamers, and he serves as an Immigration Consultant for Lost Tribe, a non-profit focused on connecting Jewish teens through esports and content creation.

Over the past 60+ years, the firm has concentrated their practice in all aspects of U.S. immigration and nationality law, servicing the immigration needs of prominent American and International firms, banks, industrial, financial, and manufacturing concerns and law firms in connection with the personnel needs of their foreign national employees, including massive corporations with thousands of employees. In addition, they have a distinguished clientele and have done substantial immigration work for performing artists, influencers, directors, writers, models, actors, athletes, esports professionals, fine artists, art dealers, curators, streamers, and literary agents. We are expanding our esports practice greatly and represent a handful of teams and individuals across various platforms and games/leagues.

Despite difficulties currently being encountered in dealing with U.S. immigration authorities, we have maintained an extraordinary track record for success in our cases. In addition, our entire staff is known for its experience and special expertise in processing each foreign national’s case with nothing less than the highest level of professionalism. Although we are based out of New York City,, we also have offices in Miami, New Jersey, Los Angeles (by appointment only), and soon, Tel Aviv, Israel, and together with our multilingual and experienced staff,  we represent clients throughout our great nation and the entire world.

For more information on this or any other type of visa or immigration inquiry, please visit www.wildeslaw.com or contact josh@wildeslaw.com.