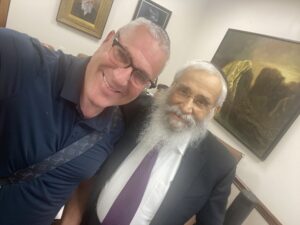 Born in Tashkent, Uzbek Soviet Socialist Republic in 1946, Rabbi Sholom Lipskar was smuggled as a baby through the Soviet border to a Displaced person (DP) camp in Germany. Arriving in North America in the early 1950s, Rabbi Lipskar’s family settled in Ontario, Canada. Sholom Lipskar was ordained as a Rabbi from the Lubavitch Yeshiva in Brooklyn in 1968. In 1982, Rabbi Lipskar founded The Shul of Bal Harbour in Surfside, Florida and is its head Rabbi. He also founded the Aleph Institute, a non-profit national humanitarian organization dedicated to improving the quality of life for both prisoners and military personnel and their families and a dynamic lecturer on Jewish philosophy and mysticism. It was our honor to assist Rabbi Lipskar,  a prominent rabbi that epitomizes the importance of immigration and safe haven in America!