we wish good health to our client and friend, pelÉ. 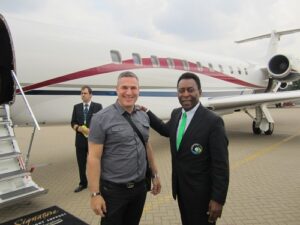 During his magnificent playing career, Pelé led Brazil to three FIFA World Cup championships, scored over 1,200 goals, and helped catapult the sport of soccer and the New York Cosmos to new heights in the United States, where Pelé and the Cosmos drew record crowds and boosted the sport’s popularity.  Often called “The King of Football,” Pelé played for the New York Cosmos until his retirement in 1977. Since retiring as a player he has won several lifetime achievements awards, worked with numerous charities, and served as a United Nations Goodwill Ambassador.

With Pelé’s help, in 2011, the Cosmos re-established a team in Major League Soccer, acquired a home field at James M. Shuart Stadium, formerly known as Hofstra Stadium, in Hempstead, New York, and have continued to create partnerships abroad with soccer institutions of worldwide renown.

Michael Wildes traveled with Pele and his team to Europe on many occasions developing a close and personal relationship. Pelé often referred U.S. immigration-related legal matters to Michael and even graciously offered words of praise for Michael Wildes’ book Safe Haven in America: Battles to Open the Golden Door, which draws on over quarter of a century of his practice in the Immigration field.

“ I appreciate Leon Wildes and his son Michael from when they handled my friend John Lennon’s green card, right up to Michael’s handling of my very own visa. Their legend as champions of international immigration is well-deserved.”

It was the firm’s honor to secure an O-1 “extraordinary ability” visa on Pelé’s behalf.