Managing Partner Michael Wildes announces that the firm successfully secured a Humanitarian Parole on behalf of a client requiring life-saving medical treatment in the United States. 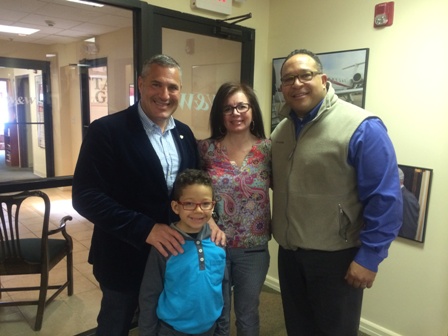 Ms. Vittoria Centrone Almeida is just like any other wife and mother; she worries about her husband’s well-being, her child’s education, and their overall happiness. Except Ms. Centrone Almeida also worries about her own deteriorating health condition, one which requires her to receive life-saving medical treatment in the United States.
The firm of Wildes & Weinberg lifted some of Mrs. Centrone Almeida’s worries recently when they successfully obtained an initial Humanitarian Parole on her behalf.  Humanitarian parole is sparingly granted by the United States Citizenship and Immigration Services (USCIS) and allows someone who is otherwise inadmissible to the United States to enter and remain here for a temporary period of time due to a compelling emergency.
The initial Humanitarian Parole which was granted after an extensive Q & A by the Customs and Border Patrol (CBP) post at Rainbow Bridge on the New York State/Canadian border just last month allowed Ms. Centrone Almeida to enter the U.S. based on medical hardship for a thirty (30) day period ending May 18, 2014.  Clearly, that was not a sufficient amount of time.  Led by Managing Partner Michael Wildes, the talented staff of Wildes & Weinberg, was able to obtain a further extension of Humanitarian Parole for a period of one (1) full year through April 2015 from CBP at JFK International Airport in New York so that Ms. Centrone Almeida can continue to receive her life-saving treatment in America.
Ms. Centrone Almeida  is the mother of a seven (7) year old boy and the spouse of Stephen Almeida, an Account Executive at one of New York’s top energy firms, who is also a decorated veteran of the U.S. military.
Both Wildes & Weinberg and the Centrone Almeida families are extremely appreciative to the U.S. Customs and Border Protection (CBP) at Rainbow Bridge in upstate New York for admitting and granting the initial medical hardship Humanitarian Parole and to the CBP at JFK International Airport in New York City for their expeditious handling in extending the Humanitarian Parole. Upon learning of the extension, Ms. Centrone Almeida exclaimed, “Thanks for the great news!  Getting a year extension has taken a great load off my shoulders.  I’m excited to see the new I 94 attached to my passport.”
We wish Ms. Centrone Almeida a full and speedy recovery as she continues to receive life-saving medical treatment in the United States.
The firm of Wildes & Weinberg has been assisting individuals and families with their U.S. Immigration and Nationality needs for over five (5) decades.