MANAGING PARTNER MICHAEL WILDES IS PICTURED WITH HIS SUDANESE DOCTOR CLIENT IN NYC AS HE AWAITS NEWS OF HIS FAMILY’S ARRIVAL  AFTER PRESIDENT TRUMPS IMMIGRATION BAN WAS SET IN PLACE, FEBRUARY 2017. 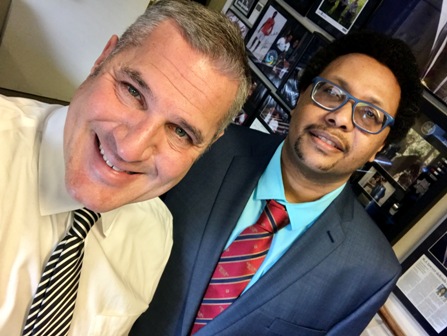 A prominent New York City based Sudanese-born U.S. citizen and neurosurgeon went into the OR Tuesday morning February 7, 2017 without knowing if his family, who was scheduled to arrive via JFK airport early the same morning, would be waiting for him after a complex 12 hour brain surgery.  Michael sent Felicia Zeidman, Esq, a member of our litigation team, to JFK to provide assistance, if needed.  Luckily, the family arrived without incident and the patient is mending well.

According to Michael Wildes, “We were glad we could provide the reassurance necessary to allow the good doctor to do his work. We continue to remain glued to the legal briefings and outcomes of the current debate about the Executive Order in order to assist our clients.”