a look back: leon wildes new york times letter to the editor 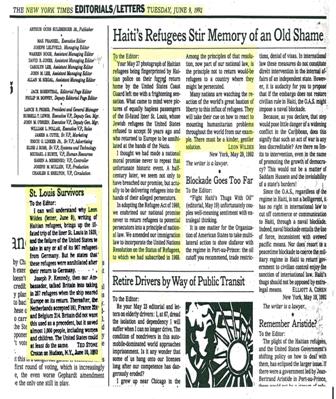 On June 9, 1992, Wildes & Weinberg, P.C Founding and Senior Partner Leon Wildes published a Letter to the Editor of The New York Times, address the need for a more humanitarian approach when dealing with individuals who appear at our borders.

Holding J.D. and LL.M. degrees from the New York University School of Law, Leon Wildes  was an Adjunct Professor of Law at the Benjamin N. Cardozo School of Law in New York, where he taught immigration law for more than 30 years. He regularly publishes scholarly articles in the field and lectures widely to both immigration lawyers and lawyers in general practice, and has practiced in the field for fifty years. A recognized authority in his field, he served as National President of the American Immigration Lawyers Association and has testified before the United States Congress as an expert in immigration matters. Awarded the Edith Lowenstein Memorial Award for Outstanding Contributions to the field of Immigration Law, he is best known for his successful representation of former Beatle John Lennon and his wife Yoko Ono in deportation proceedings spanning a five year period the circumstances of which have inspired many films, documentaries, and literary works.