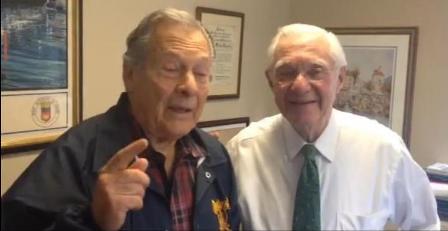 Reunited after 33 years, Leon Wildes, Senior Partner and Founder of Wildes & Weinberg, P.C. and former immigration attorney Victor Anfuso  shed light on how it came to be that Mr. Anfuso’s firm was merged with that of Mr. Wildes.  Due to a deep routed connection and feeling of mutual respect, Anfuso joined Wildes’ firm in 1980 in the position of counsel.  This allowed Mr. Anfuso’s clients to feel comfortable with the transition.  Once he felt that his clients were in good hands, Mr. Anfuso sold his business to Leon Wildes, who became his good friend.
Today, the firm of Wildes & Weinberg, consists of over forty individuals and remains solely dedicated to the practice of U.S. Immigration Law. The firms practice expanded steadily over the last 54 years as word of its outstanding achievements spread in the international community. Perhaps this was due to the fact that one of Leon Wildes’ best known accomplishments was his successful representation of John Lennon in his widely publicized deportation proceedings, the circumstances of which have inspired several films and documentaries.
The firm concentrates its practice in all aspects of U.S. immigration and nationality law, servicing the immigration needs of prominent American and International firms, banks, industrial, financial and manufacturing concerns and law firms in connection with the personnel needs of their foreign national employees.  Its roster of distinguished clientele has since grown, as Wildes & Weinberg has done substantial immigration work for performing artists, directors, writers, models, actors/actresses, athletes, fine artists, art dealers, curators, and literary agents including Joe Cocker, Johnny Rotten, Paloma Picasso, the 2011, 2010, 2009 and 2008 Miss Universes, supermodel Giselle Bundchen and Sarah Brightman, the world’s bestselling female classical artist of the twenty-first century.
To view the video, please click here.