an afternoon with eric melvin (nofx)

On August 13, 2015, the office of Wildes & Weinberg was brightened with the presence of Mr. Eric Melvin, the guitarist of legendary California punk band NOFX. In addition to being a world-renowned musician as the guitarist for NOFX, one of the most successful independent bands of all time that has sold over 6 million records worldwide, Mr. Melvin is also a true visionary. As Mr. Melvin’s professional endeavors began to develop outside the realm of stage performance, he sought out an immigration law firm to help him file a new visa petition, in order for him to work with a larger pool of talent across national borders.

He hired the law firm of Wildes & Weinberg for this important job. Recently, Managing Partner Michael Wildes and his team successfully secured a new visa petition approval on Mr. Melvin’s behalf. “So much has happened since, it’s really great,” Mr. Melvin said.  Mr. Melvin is excited and looking forward to the next few years. “I’m really glad you made this process so smooth. Thank you for making it happen.” 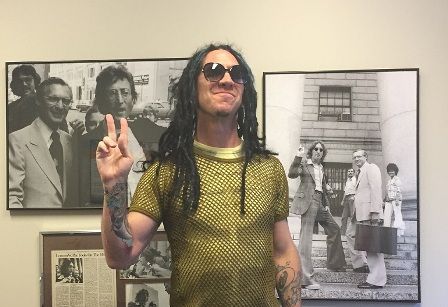 The charms of this legendary musician as a businessman stood equal to his charisma on stage. His personality resonates with confidence, gentlemanly chivalry and humor.  It also appeared he was quite the Beatles fan. Standing next to a black-and-white photograph of the firm’s Founding Partner Leon Wildes and John Lennon, Mr. Melvin casually handed over his phone. “Here, take a picture of me.” Upon request, he also produced a graffiti-style autograph on a photo of himself playing the Gibson Les Paul. He said he would love to stay longer, but he had to go – his presence was required all over Manhattan. He had to attend a screening of a movie about NOFX, and the band was scheduled to perform at the Gramercy Theatre on 23rd Street later that night.