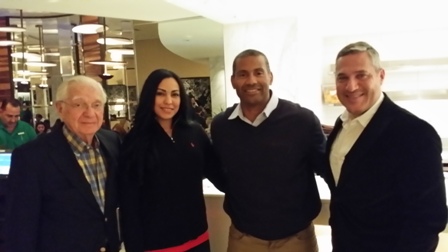 The firm of Wildes & Weinberg, whose practice concentrates exclusively in federal U.S. immigration and nationality law, recently opened an office in the Miami (Aventura), Florida area.  This is the firm’s second expansion in recent years;  its headquarters is on Madison Avenue in New York City and a satellite office is located in Englewood, NJ.
Founded in 1960, the firm grew out of the practice of Leon Wildes, Esq., a distinguished immigration practitioner in New York City. Its original clientele consisted of individuals, rather than corporations, who had been placed in deportation or exclusion proceedings or were otherwise in jeopardy. The practice expanded steadily as word of its outstanding achievements in individual cases spread in the international community (including the firm’s representation of former Beatle John Lennon in deportation proceedings), attracting clients from around the world. Today the firm consists of 13 attorneys, all experts in the field of U.S. immigration and nationality law, with more than two dozen staff members handling the work of a distinguished and ever-growing clientele. The firm is known for its prompt and efficient service. Despite its steady growth over the past 50 years, the hallmark of the law practice remains the individualized attention to its clients’ needs.
According to Michael Wildes “South Florida has become a truly international, cosmopolitan destination and the population of immigrants throughout Florida is rapidly growing in terms of numbers, economic ability and political influence. While we have represented numerous clients in Florida over the past 50 years, we felt it was important to create a permanent  presence in the Miami (Aventura), area in order to make ourselves more readily available to our current clients and this important demographic group.  Our services in all three locations run the full gamut of a federal immigration law practice, including employment and investment-based immigration, work permits, permanent residence for qualified individuals, family-based immigration, asylum applications, all temporary and permanent-type visas, immigration compliance/employer sanctions (Form I-9 Audits) and U.S. citizenship. In all three offices, our firm stands commited to continue to serve prompt, honest, individualized counsel for federal immigration related services”.
Having secured visas for soccer icon Pele, as well as other professional athletes such as Eric Cantona, Greg Norman, Virginia Wade, Billy Smith, Al Arbour, and Kwame James, among others,  the firm of Wildes & Weinberg, has a long tradition of helping to bring talented athletes to our shores.
Qualified athletes and entertainers may find themselves eligible to come to the United States under one of the P Visa categories:
P-1, Athletes and Entertainers
In the case of athletes performing as individuals or teams, and artists performing as part of an internationally recognized entertainment group are issued P-1 visas. The group must be based abroad, and at least 75% of the members must have been with the group for one year or more. A petition must be filed with the immigration service, by a U.S. agent, presenter or employer, including a contract and itinerary stating where and when the group will perform or compete. Like the O-1, the P visa requires consultation with appropriate labor unions, or peer groups in occupations where there is no union. The maximum period of initial admission for an athlete is five years, for a team it is one year, and for an entertainment group, up to one year, if supported by contracts and itinerary.
P-2, Athletes and Entertainers (Reciprocal Exchange)
Athletes and entertainers entering the United States to perform under reciprocal exchange programs are issued P-2 visas.  This category is not petition based, and generally does not require labor consultation because the reciprocal exchange is customarily between two unions, one in the U.S. and one abroad.
P-3, Athletes and Entertainers (Culturally Unique)
Athletes and entertainers entering to perform in a culturally unique program are issued P-3 visas.  The individual or group must show some evidence of distinction in the art form or sport (examples include flamenco, Kabuki, capoeira). Like the P-1, a majority of the group must have worked together for at least a year, a petition must be filed with the immigration service by a U.S. agent, presenter or employer, including a contract and itinerary stating where and when the group will perform or compete, and a labor advisory opinion from a union or peer group is required. The maximum period of initial admission is three years, if supported by contracts and itinerary, and P-3 status may be extended for a maximum stay of five years.
For more information on this particular type of visa or for any  other immigration related questions, feel free to contact Michael@wildeslaw.com or call (212) 753-3468.