from one mayor to another

David Dinkins, was elected to the state assembly in 1965 and later served as President of Elections for New York City, City Clerk, and as Manhattan borough President before successfully running for NYC Mayor in 1989. He was the first black Mayor of New York City and the first black mayor of a major U.S. city.  Michael Wildes, moved to Englewood, NJ in 1995. Shortly thereafter, he was appointed to the Board of Adjustment and then served two-terms as a City Councilman (1998-2003) and two terms Mayor (2004-2010).  He was the first orthodox Jewish Mayor of a major municipality in the United States.

Mayors Dinkins and  Wildes came together in 2004 when Wildes hosted a benefit reception at his home on behalf of Boys Town Jerusalem and which introduced Jerusalem Mayor Uri Lupolianski to his constituencies and NJ State Leadership .  Mayor Dinkins offered opening remarks at that event which recognized Boys Town Jerusalem as one of Israel ‘s premier institutions for educating the country’s next generation of leaders in the fields of technology, commerce, education, the military and public service. Founded in 1948, Boys Town has pursued its mission of turning young boys from limited backgrounds into young men with limitless futures. Proceeds of that evening were earmarked to establish a special scholarship fund in Mayor Wildes’ name.

The Inscription signed by Mayor Dinkins to Mayor Wildes read: “To Michael: From One Mayor To Another”. 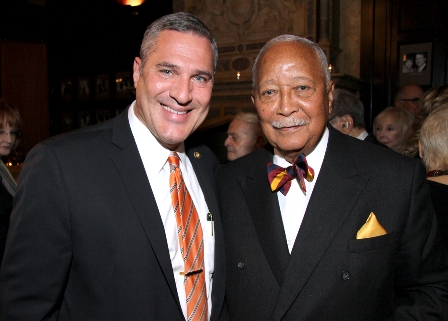