insights into the middle east diplomacy with the hon. jason greenblatt

Wildes & Weinberg, P.C., Managing Partner Michael Wildes, a former federal prosecutor and current mayor of Englewood, New Jersey had the privilege of introducing the Honorable Jason Greenblatt, Former Assistant to the President and the White House Special Envoy to the Middle East, who provided Insights into Middle East Diplomacy & the Rise of Antisemitism through the Eyes of a Son of Survivors to benefit  the Capital Campaign of The Northern New Jersey Holocaust Memorial & Education Center’s Centerpiece Sculpture Project. Teaneck, New Jersey. January 2020 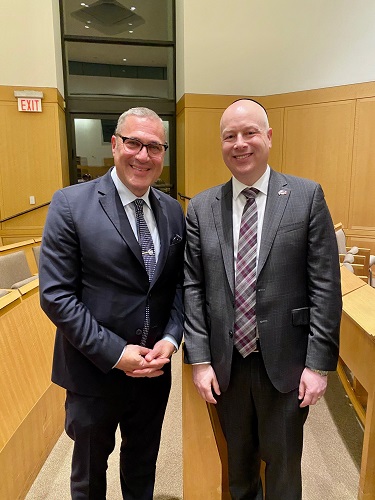 In addition to the Hon. Jason Greenblatt, the audience also heard remarks from State Senator Loretta Weinberg and resident Norbert Strauss who received the Community Leadership Award and the Holocaust Awareness Award, respectively.

Wildes, the Managing Partner of Wildes & Weinberg, P.C., a boutique U.S. Immigration law firm headquartered in New York City, takes his civic and philanthropic responsibilities seriously.  He served for over 10 years with the NYPD as an Auxiliary Police Officer; Nearly four years as a Federal Prosecutor; Was a two-term City Council Member and is currently serving his third term as Mayor of Englewood, New Jersey; Was Chair of the American Jewish Congress’ Committee on International Terrorism; Was a Member of the Board of Directors of Boys Town of Jerusalem; among many other volunteer activities.

Michael’s firm, was founded in 1960 by his father, Leon Wildes, whose best-known accomplishment was his successful representation of John Lennon in his widely publicized deportation proceedings, the circumstances of which have inspired several films and documentaries. The firm specializes exclusively in the practice of U.S. immigration and nationality law, has a distinguished domestic and international clientele, and can assist with any type of immigration matter including employment and investment-based immigration, work permits, permanent residence for qualified individuals, family-based immigration, asylum applications, all temporary and permanent type visas, and U.S. citizenship.

In addition to running a highly successful immigration law practice, and serving his third term as Mayor of Englewood, New Jersey, Michael is the author of Safe Haven in America: Battles to Open the Golden Door, which draws on over a quarter of a century of his practice in the immigration field, is an Adjunct Professor at the Benjamin N. Cardozo School of Law in New York, and serves as Counsel to Lincoln Center and several international/corporate law firms.