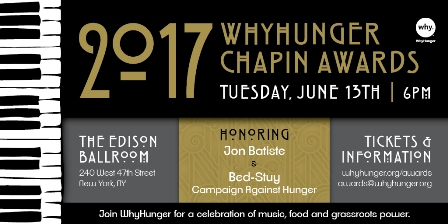 WhyHunger is a leader in building the movement to end hunger and poverty by connecting people to nutritious, affordable food and by supporting grassroots solutions that inspire self-reliance and community empowerment.

On both a domestic and international level, the number of people experiencing food insecurity, meaning that they go without food and/ or need to rely from time to time on emergency sources or that face hunger on a daily basis due as a result of living at or below the poverty line is increasing exponentially. Research shows that people who do not consume the minimum amount of calories needed for sound health and growth also experience hunger have higher levels of chronic illness, anxiety, and depression.

Help us stamp out world hunger by participating in one or more of WhyHunger’s programs such as:  Artists Against Hunger & Poverty, The Food Security Learning Center, Global Movements, Grassroots Action Network, Hungerthon, and National Hunger Clearinghouse.  To learn more about these programs or the good work of WhyHunger, visit www.whyhunger.org.

WhyHunger’s annual dinner will be held on June 13, 2017 at the Edison Ballroom in New York City. This years honorees are Jon Batiste,  a globally celebrated musician, educator, bandleader and television personality, as well as Bed-Stuy Campaign Against Hunger.

Founded in 1960, by Senior Partner Leon Wildes, Wildes & Weinberg P.C. is the premier law firm in the United States concentrating exclusively on the immigration and nationality field. Its original clientele consisted of individuals, rather than corporations, who had been placed in deportation or exclusion proceedings or were otherwise in jeopardy.  The practice expanded steadily as word of its outstanding achievements in individual cases spread in the international community including the firm’s representation of former Beatle John Lennon and his wife Yoko Ono, in their widely publicized deportation proceedings, the circumstances of which have inspired several films and documentaries.

As part of its commitment to community service and social action, Wildes & Weinberg continues to expand its reach into the non-profit world, one meal at a time.