Friends of ELNET (European Leadership Network) hosted an evening on The critical Importance of the French-Israel Relationship in New York City. In addition to the words of Former Prime Minister of France Manuel Valls and Consul General of Israel in New York Ambassador Dani Dayan, the invocation was given by Rabbi Mikahael Cohen of the Center Culturel Juif Francis de New York.  ELNET, which was celebrating its 10th anniversary of pro-Israel advocacy in Europe, educates leaders and citizens abroad about Israel through seminars, events, and activities. 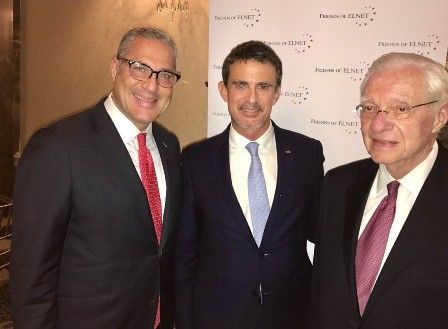 More than fifty seven years since its inception, Wildes & Weinberg continues to specialize exclusively in the practice of U.S. immigration and nationality law and serves a distinguished domestic and international clientele with their employment and investment-based immigration visas, work permits, permanent residence for qualified individuals, family-based immigration, asylum applications and all other temporary and permanent type visas. The firm was founded in 1960 by Leon Wildes, whose best-known accomplishment was his successful representation of John Lennon in his widely publicized deportation proceedings, the circumstances of which have inspired several films and documentaries. In addition to running a highly successful immigration law practice, Michael serves as Counsel to Lincoln Center, other international/corporate law firms, and is renowned for his successful representation of distinguished individuals and corporate clients such as performing artists, directors, writers, models, actors/actresses, athletes, race car drivers, fine artists, art dealers, curators, musicians, photographers, stylists, and literary agents. Some of the firm’s recent clients include famed artist Sarah Brightman, several Miss Universe winners as well as soccer icon Pele and Chef Jean-Georges.

Today, the firm of Wildes & Weinberg, which continues to maintain its stellar reputation in the field of U.S. Immigration & Nationality Law, has offices in New York City, New York, Englewood, New Jersey,  Miami, Florida, and by appointment in Los Angeles, California.