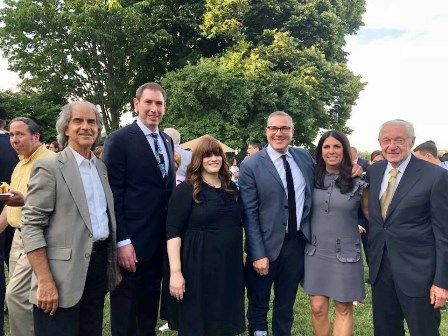 Wildes & Weinberg’s Founding and Managing Partners, Leon and Michael Wildes, enjoyed speaking with local, state, federal, and international leaders including Consul General of Israel, Dani Dayan, Council member for the 48th District of the New York City Council, Chaim Deutsch, Orthodox rabbi and the CEO of the Orthodox Union Kosher Division, Rabbi Menachem Genack, as well as many other illustrious members of the Jewish community.

Michael also served  two terms (2004-2010) as the Mayor of Englewood, New Jersey, where he recently won the democratic primary for Mayor once again,  was appointed to the District Appeals Board of the Selective Service System for the State of New Jersey, was a member of the New Jersey Governor’s Blue Panel on Immigration, and has been a guest lecturer at many distinguished forums and institutions including Yale University, New York University, Brooklyn Law School, and The Benjamin N. Cardozo School of Law, where Michael is an Adjunct Professor of Business Immigration Law.