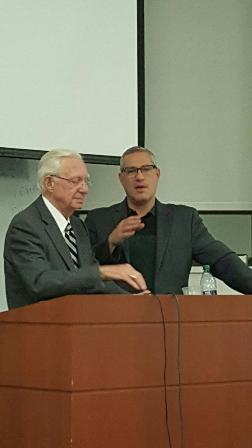 The students of Michael Wildes’ Business Immigration law class were privileged to hear “war stories”  about  John Lennon vs. the U.S. from Leon Wildes who was an Adjunct Professor of Immigration Law at the Benjamin N. Cardozo School of Law in New York, where he taught immigration law for 33 years prior to passing the teaching torch to his son Michael Wildes.  In addition to his position as an Adjunct Professor of Business Immigration Law at Cardozo, Michael is also a frequent legal commentator/analyst for network television.  In continuing with his father’s illustrious legacy, Michael  asked his father to co-teach his November 18, 2015 class which is dedicated to the Lennon case. Further, not only is Michael a professor at Cardozo, he is also an alumni, having graduated in 1989,and he met his wife, Amy, in his father’s class.

If you would like to learn about Leon’s relationship with John and Yoko and his successful handling of the case, please click here to visit our John Lennon page or contact Michael Wildes at michael@wildeslaw.com