On January 24, 2019, Leon and Michael Wildes were keynote panelists at the New York University School of Law, International Student Interview Program.  This was the Senior Wildes’ 33nd  time! The panel discussion focused on immigration regulations for LL.M. students and attorneys wishing to work in the United States.  Mr. Leon Wildes, (who holds a J.D. and LL.M from NYU School of Law) has been presenting this type of workshop to the NYU students for nearly three decades. This marks Michael’s sixth year as a co-panelist. Specifically addressed was the paperwork necessary for employment in the United States, a comprehensive look at permission to work, and an elaborate description of various work visas. The presentation was followed by a Question & Answer session. The event was coordinated by Clara Solomon, Director, Counseling & Career Development, Office of Career Services, New York University School of Law. 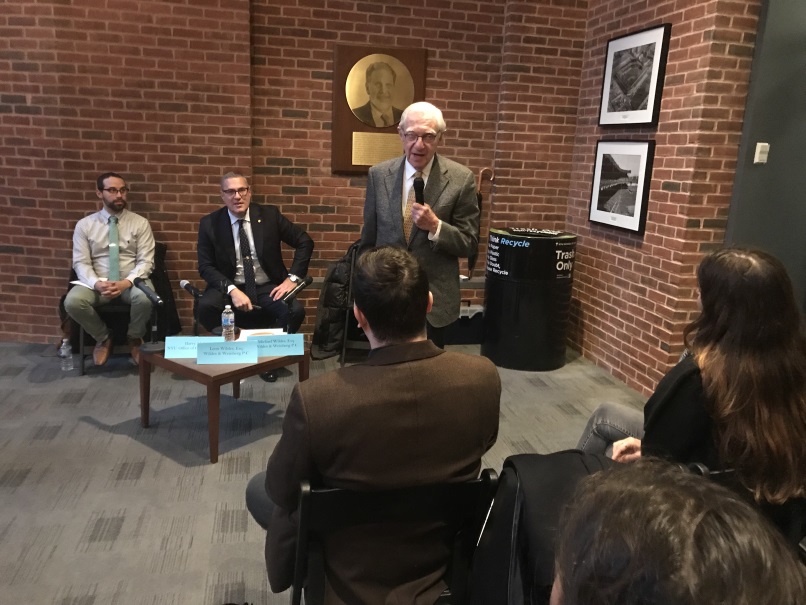 Founded in 1960 by Senior Partner, Leon Wildes, the practice of Wildes & Weinberg, P.C., expanded steadily as word of its outstanding achievements spread in the international community. One of Leon Wildes’ best known accomplishments was his successful representation of John Lennon in his widely publicized deportation proceedings, the circumstances of which have inspired several films and documentaries. Moreover, Leon Wildes held the position of Adjunct Professor of Immigration Law at the Benjamin N. Cardozo School of Law in New York for more than 32 years. He also regularly publishes scholarly articles in the field and lectures widely to both immigration lawyers and lawyers in general practice. A recognized authority in his field, Mr. Wildes served as National President of the American Immigration Lawyers Association and has testified before the United States Congress as an expert in immigration matters. Awarded the Edith Lowenstein Memorial Award for Outstanding Contributions to the field of Immigration Law.

In addition to serving as the firm’s Managing Partner, Michael Wildes also serves as Counsel to Lincoln Center, and several international/corporate law firms. A former Federal Prosecutor with the United States Attorney’s Office in Brooklyn  (1989-1993), he has testified on Capitol Hill in connection with anti-terrorism legislation and is internationally renowned for his successful representation of distinguished individuals and corporate clients. Having represented the United States government in immigration proceedings, Michael Wildes is a frequent participant on professional panels and commentator on network television and radio with regard to corporate immigration law, employer sanction work  and compliance. Michael represents many performing artists, directors, writers, models, actors/actresses, athletes, race car drivers, fine artists, art dealers, curators, and literary agents. Some of his recent clients include famed artist Sarah Brightman, many of the former Miss Universes’ as well as soccer icon Pele; master Chef Jean-Georges and  other talented artists. Mr. Wildes was sworn-in in January for his third term as Mayor of Englewood, New Jersey and has served on the New Jersey Governor’s Blue Ribbon Panel on Immigration. He is also an Adjunct Law Professor at the Benjamin N. Cardozo School of Law in New York City.

Fifty nine years since its inception, the firm continues to serve a distinguished domestic and international clientele and covers all areas of U.S. immigration law, including employment and investment-based immigration, work permits, permanent residence for qualified individuals, family-based immigration, asylum applications and all temporary and permanent-type visas. Today the firm’s multi-lingual staff is spread throughout its four offices located in New York City, Englewood, NJ, Miami, FL, and by appointment in Los Angeles, CA.

If you are interested in arranging a lecture for your organization, please contact Michael Wildes at michael@wildeslaw.com.