FOUNDING PARTNER LEON WILDES AND MANAGING PARTNER MICHAEL WILDES HEAD TO LONDON, WHERE LEON RECALLED HIS PERSONAL ACCOUNT OF THE JOHN LENNON MATTER – JOHN LENNON VS. THE USA – THE INSIDE STORY OF THE MOST BITTERLY CONTESTED AND INFLUENTIAL DEPORTATION CASE IN UNITED STATES HISTORY – SEPTEMBER  2017.

Leon’s discussions included speaking engagements at The Western Marble Arch Synagogue, located in London’s West end district, the law firm of Harbottle & Lewis, which advises clients across the media, communications and entertainment industries, as well as  Mishcon de Reya, an international law firm. The father-son duo even made time to walk across Abbey Road and stop to pose at many favorite Lennon/Beatles venues. 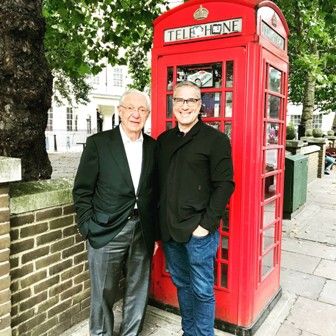 Since the book’s launch in August 2016, nearly 5000 copies have been purchased, Leon and Michael Wildes have appeared on dozens of TV and radios shows including Good Day NY and the Stolar Report and 1000s of people have attended a “Conversation with Leon Wildes”, at noteworthy institutions such as The Benjamin N. Cardozo School of Law and The Lower East Side Tenement Museum.  Leon and Michael were available throughout the three day conference to speak with Beatles fans as well as sign books.