The art of John and Yoko, which focuses on the collaborative art projects for peace undertaken by Yoko Ono and John Lennon, is currently on exhibit at the Foundation Phi in Montreal, QC. The final piece of the carefully curated exhibit shows John and Yoko, together with Founding Partner Leon Wildes, during their 1973 press conference, in which they announced the idea of “Nutopia” while fighting to remain in the United States. On a recent trip to Canada, Leon Wildes’ granddaughters paid tribute to their grandfather and posed alongside the picture. August 2019. 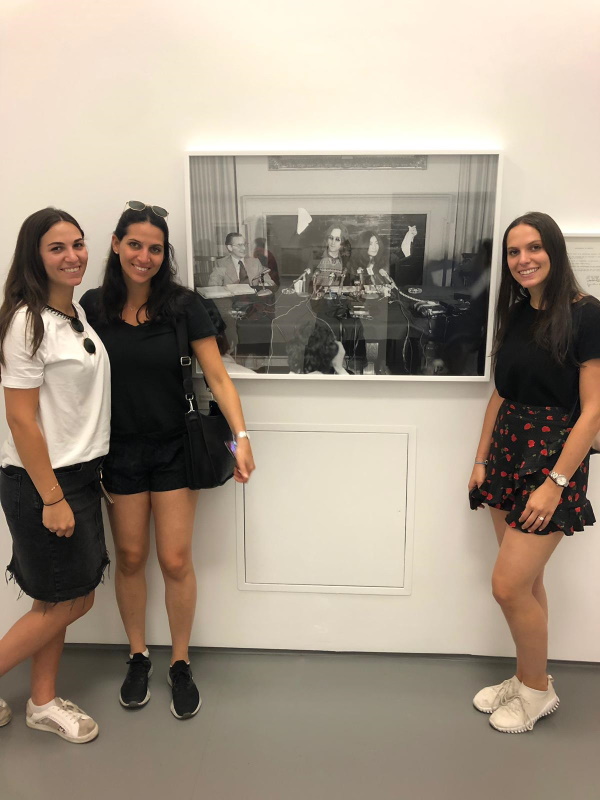 Wildes & Weinberg opened in 1960 and is perhaps best known for Leon Wildes’ successful representation of former Beatle John Lennon and his wife Yoko Ono in their deportation matter, the circumstances of which have inspired several films and documentaries. The firm’s Managing Partner, Michael Wildes ( Leon’s son) still represents Yoko Ono Lennon on her immigration related matters and still specializes exclusively in the practice of U.S. immigration and nationality law. It has a distinguished domestic and international clientele, and can assist with any type of immigration matter including employment and investment-based immigration, work permits, permanent residence for qualified individuals, family-based immigration, asylum applications, all temporary and permanent type visas, and U.S. citizenship.

Between 1971 and 1976, Leon represented Lennon and Ono in their struggle to remain in the United States, despite the concerted attempts of the Nixon Administration to deport them.

Leon Wildes’ long-awaited memoirs of the case aptly titled John Lennon vs. the U.S.A.is published by Ankerwycke Books, an imprint of ABA Publishing, a division of the American Bar Association.

Michael Wildes is the firm’s Managing Partner and is also currently serving his third term as Mayor of Englewood, New Jersey.  Moreover, he is the author of Safe Haven in America: Battles to Open the Golden Door, which draws on over a quarter of a century of his practice in the immigration field, is an Adjunct Professor at the Benjamin N. Cardozo School of Law in New York, and serves as Counsel to Lincoln Center and several international/corporate law firms. Michael is internationally renowned for his successful representation of distinguished individuals and corporate clients such as performing artists, directors, writers, models, actors/actresses, athletes, race car drivers, fine artists, art dealers, curators, musicians, photographers, stylists, and literary agents. Some of the firm’s other distinguished clients include scholar Rabbi Lord Jonathan Sacks, as well as soccer icon Pele, Master Chef Jean-Georges and First Lady Melania Trump and her family.