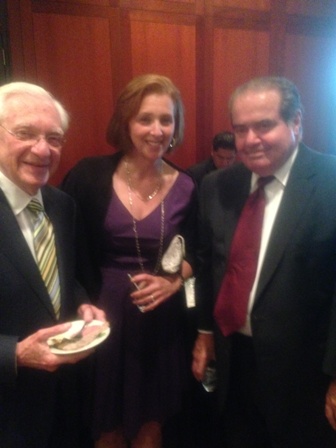 On Tuesday, June 10, 2014, the 20th Aleph Society Dinner was held at The Museum of Jewish Heritage in New York, NY.  Founded in 1988, The Aleph Society supports Rabbi Adin Steinsaltz’s worldwide network of institutions, educational programs and publishing projects and has operations in Israel, Russia, the United States, and the United Kingdom. The dinner honored the work of Rabbi Steinsaltz and featured a tribute to the late Italian Prime Minster Guilio Andreotti for his generous and crucial contribution to the revitalization of Jewish life in the Former Soviet Union.
Not only is Leon Wildes considered a scholar in the field of U.S. Immigration and Nationality Law, having founded Wildes & Weinberg, a boutique immigration law practice with offices in New York City, Englewood, NJ, and Aventura, FL, nearly 55 years ago, he successfully represented Former Beatle John Lennon and his artist wife, Yoko Ono in their deportations proceedings, the circumstances of which have inspired many articles, books, and films. In addition, Leon Wildes served as an Adjunct Professor of Immigration Law at The Benjamin N. Cardozo School of Law in New York City for 33 years prior to handing over the reigns to his son and law partner, Michael Wildes, who now teaches a course on Business Immigration at Cardozo.
According to Leon Wildes, “it was so nice to meet at The Aleph Society dinner with the Honorable Justice Scalia, who has been proudly serving  the U.S.  in his capacity of Associate Justice of the Supreme Court since 1986 and to be reunited with my former student, Aviva Miller, Development Director of the National Yiddish Theatre – Folksbiene, a performing arts company whose events celebrate the Jewish experience and transmit a rich cultural legacy in both English and Yiddish. For over 25 years, the Aleph Societies across the world have worked hard to promote the development of Jews, Jewish identity, and Jewish communities. May they continue to actualize their mission for many years to come.”