Wildes & Weinberg, P.C. Founding Partner Leon Wildes was the guest of honor at the Benjamin N. Cardozo School of Law Reception of Appreciation held on December 3, 2014.

More than 150 people attended the Reception of Appreciation, honoring Leon Wildes and his establishment of The Wildes Family Scholarship at the Benjamin N. Cardozo School of Law, December 3, 2014. The scholarship was created to afford qualified students the opportunity to attend Cardozo, notwithstanding the financial cost of such an education.

During his second year of teaching, Mr. Wildes realized that he wished to help develop Cardozo into a school committed to doing good and pursing justice for all while simultaneously instilling these same values into his family. His son Michael, (Cardozo class of ’89) has successfully followed his fathers footsteps professionally and has served his community on a local level as a city council man and mayor of his hometown, Englewood, NJ.  Michael even met his wife Amy (Class of ’91) at Cardozo and together they work hard to perpetuate the ideals of their father.  Mr. Wildes’ son Mark, also a graduate of Cardozo (Class of ’92), is a prominent outreach Rabbi in New York City, having established Manhattan Jewish Experience, a house of worship and learning center for unaffiliated Jewish 20 and 30 year olds.

Mr. Wildes explains that “the establishment of The Wildes Family Scholarship is the fulfillment of a life-long dream”. While balancing a budding law career, Mr. Wildes became an Adjunct Professor of Immigration Law at Cardozo, a position he held for nearly 30 years before passing the academic baton to his son and partner, Michael Wildes, who now teaches Business Immigration Law. 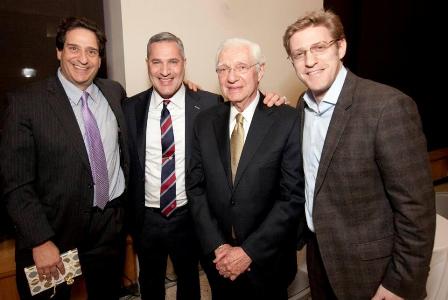 Since its founding in 1960, Wildes & Weinberg has concentrated its practice in all aspects of U.S. immigration and nationality law, servicing the immigration needs of individuals as well as prominent American and International organizations, banks, industrial, financial and manufacturing concerns, and law firms in connection with the personnel needs of their foreign national employees.  In addition, the firm has a distinguished clientele and have done substantial immigration work for performing artists, directors, writers, models, actors/actresses, athletes, fine artists, art dealers, curators, and literary agents.

Today, the firm of Wildes & Weinberg, maintains offices in New York City, New York, Englewood, New Jersey, and Miami, Florida, and continues to maintain its stellar reputation in the field of U.S. Immigration & Nationality Law.  This reputation stems in due part due to Mr. Leon Wildes successful representation of former Beatle John Lennon in his widely publicized deportation proceedings, the circumstances of which have inspired several films, documentaries, and legal precedent.

In fact, just prior to the reception, Mr. Leon Wildes joined Michael at his Business Immigration Law class to discuss the famed John Lennon case with Michael’s students. In view of the fact that this landmark case brought to light the government’s Deferred Action program, which is the focus of  the current immigration debate, it was particularly timely, especially  in light of President Obama’s most recent executive actions.