leon wildes to be honored at cardozo law school

Wildes & Weinberg, P.C. Founding Partner Leon Wildes is slated to be the guest of honor at A Reception of Appreciation in recognition of the establishment of The Wildes Family Scholarship at The Benjamin N. Cardozo School of Law, December 3, 2014.
Leon Wildes was an Adjunct Professor of Law at the Benjamin N. Cardozo School of Law in New York, where he taught immigration law for 33 years prior to passing the teaching torch to his son Michael Wildes, the firm’s Managing Partner.  In addition to his position as an Adjunct Professor of Business Immigration Law at Cardozo, Michael is also a frequent legal commentator/analyst for network television.  In continuing with his father’s illustrious legacy, Michael has asked his father to co-teach his December 3, 2014 class which is dedicated to the Lennon case. 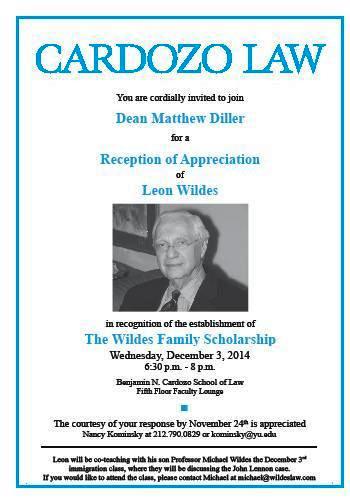 (Click here to view larger image.)
Founded in 1960 by Leon Wildes, the firm of Wildes & Weinberg is dedicated to the U.S. immigration needs of prominent individuals as well as American and International corporations in connection with the personnel needs of their foreign national employees. Leon Wildes is best known for his representation of former Beatle John Lennon and his artist wife Yoko Ono in their struggle to remain in the United States, despite the concerted attempts for the Nixon Administration to deport them. The case, which spanned five years from 1972 -1976, included bringing four separate Federal lawsuits, not only resulted in John and Yoko getting their green cards and being able to remain in the United States, but it also led to substantial changes in immigration law and brought to light secretive government practices and undue political influence, and has resulted in greater transparency in the U.S. immigration system.
More than fifty years since its inception the firm continues to serve a distinguished domestic and international clientele and covers all areas of U.S. immigration law, including employment and investment-based immigration, work permits, permanent residence for qualified individuals, family-based immigration, asylum applications and all temporary and permanent type visas. Moreover, the firm has a distinguished clientele and has done substantial immigration work for investors, scientists, physicians, bankers, performing artists, directors, writers, models, actors/actresses, athletes, fine artists, art dealers, curators, literary agents as well as famed artist Sarah Brightman, several Miss Universe’s, and soccer icon Pele.
Not only is Michael a professor at Cardozo, he is also an alumni, having graduated in 1989, he met his wife, Amy, in his father’s class, and his brother, Rabbi Mark Wildes also received his J.D from the school. The establishment of The Wildes Family Scholarship at Cardozo, is just another way that Leon and Michael Wildes continue to connect with Cardozo and together, along with the entire Wildes family, they look foward to many more years of service to the extended Cardozo community.
If you would like to attend the class and learn about Leon’s relationship with John and Yoko and his successful handling of the case, or to attend the reception and wish a hearty congratulations to Leon, please contact Michael Wildes at michael@wildeslaw.com