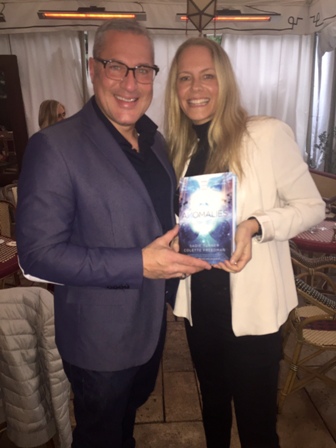 LA based producer and writer, Sadie Turner poses with Michael Wildes and her newly released teen/young adult novel “Anomolies” just prior to its debut on February 9, 2016. Michael, who was in California as part of the firm’s expansion there, is an avid reader and classic bibliophile.

Founded in 1960 by Senior Partner, Leon Wildes, the practice of Wildes & Weinberg, P.C. expanded steadily as word of its outstanding achievements spread globally. One of Leon Wildes’ best known accomplishments was his successful representation of John Lennon in his widely publicized deportation proceedings, the circumstances of which have inspired several films and documentaries.

Fifty Eight years since its inception, the firm continues to serve a distinguished domestic and international clientele and covers all areas of U.S. immigration law, including employment and investment-based immigration, work permits, permanent residence for qualified individuals, family-based immigration, asylum application, all temporary and permanent-type visas, naturalization, and Form I-9 compliance. Today, the firm has offices in New York City, Englewood, New Jersey and Miami, Florida and plans to expand to Los Angeles, California are in the works.

To learn more about Wildes & Weinberg, please contact Michael Wildes at michael@wildeslaw.com to schedule a consultation.