Dayana Mendoza on Way to Citizenship 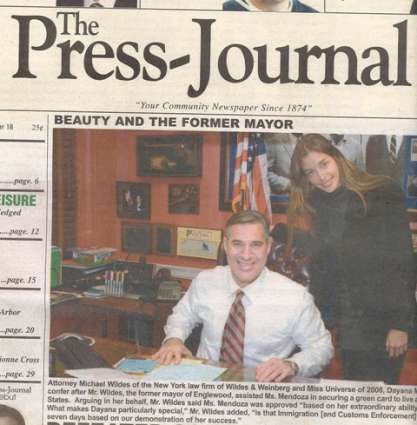 NEW YORK, NY, April 23, 2010 – Michael Wildes of Wildes & Weinberg P.C. is pleased to announce that Dayana Mendoza, Miss Universe® 2008, has been approved for a green card based on her extraordinary ability in the fashion arena.  Wildes has been assisting Mendoza, born in Venezuela, in securing a green card to reside in the United States.

Despite having traveled the world for the past eight years as a fashion model, Mendoza feels at home in the U.S. and believes there are many opportunities for her here. She will be studying at the New York Film Academy and plans on pursuing several avenues, including acting, small business ownership, and continued support of HIV/AIDS awareness.

What makes Dayana particularly special, states Wildes, is that “immigration approved the case in seven days based on our demonstration of her success.”

Michael Wildes is the managing partner of Wildes & Weinberg, P.C., a premier law firm established in 1960 specializing exclusively in the practice of U.S. immigration and nationality law. With offices in Manhattan and New Jersey, the firm has built a sterling reputation with a specialization in the fashion industry, serving esteemed clientele including the likes of Valentino, Bulgari, Gisele Bündchen and several Miss Universes, as well as other haute couture fashion houses, designers, textile manufacturers, distributors and retailers, all in their effort to secure top talent from abroad for temporary and permanent transfers to the United States.

Wildes is also a former two-term mayor of Englewood, New Jersey and a former federal prosecutor with the U.S. Attorney in Brooklyn. In addition to his expertise in the fashion industry, Wildes has become internationally renowned for representation of the federal government in immigration proceedings, for the successful representation of terrorists providing hard-to-obtain national security information to the United States, and for obtaining an injunction to prevent Libyan leader Moammar Qadhafi from residing in New Jersey during the 2009 UN Summit. He is recognized by the Democratic Party as a leading fundraiser for congressional and senate candidates and was voted one of the “100 National Up and Coming Leaders to Watch” by the Democratic Leadership Council.

For additional coverage, please see our “IN THE NEWS” page.