In the Spring of
2013, Wildes & Weinberg P.C. the premier U.S. Immigration and Nationality
Law firm in the United States, announced the expansion of its immigration law
offices by the establishment of an office in Miami
(Aventura), Florida.

Founded in 1960,
Wildes & Weinberg concentrates exclusively in federal immigration and
nationality law. The firm grew out of the practice of Leon Wildes, Esq., a
distinguished immigration practitioner in New York City. Its original clientele
consisted of individuals, rather than corporations, who had been placed in
deportation or exclusion proceedings or were otherwise in jeopardy. The
practice expanded steadily as word of its outstanding achievements in
individual cases spread in the international community (including the firm’s
representation of former Beatle John Lennon in deportation proceedings),
attracting clients from around the world. Today the firm consists of 13
attorneys, all experts in the field of U.S. immigration and nationality law,
with more than two dozen staff members handling the work of a distinguished and
ever-growing clientele. The firm is known for its prompt and efficient service.
Despite its steady growth over the past 50 years, the hallmark of the law
practice remains the individualized attention to its clients’ needs.

South
Florida has become a truly international, cosmopolitan destination and the
population of immigrants throughout Florida is rapidly growing in terms of
numbers, economic ability and political influence. While we have represented
numerous clients in Florida over the past 50 years, we felt it was important to
create a permanent  presence in Miami (Aventura), Florida, in order to
make ourselves more readily available to our current clients and this important
demographic group.   The Miami (Aventura), Florida, office is relegated to the exclusive  practice
of Federal U.S. Immigration and Nationality Law.

The
expansion of the firm’s Miami (Aventura), Florida, office
comes at a time when the complexities of U.S. immigration are growing in a
climate of confusion and upheaval, with increased government enforcement action
taking place nationwide and the potential of comprehensive immigration reform
in the air. The offices on Madison Avenue in New York City and on Palisade
Avenue in Englewood, New Jersey will remain fully staffed with bilingual
attorneys and paralegals capable of handling the needs of institutional and
corporate clients, as well as all individual and family-based immigration
matters. Our services run the full gamut of federal immigration practice,
including employment and investment-based immigration, work permits, permanent
residence for qualified individuals, family-based immigration, asylum
applications, all temporary and permanent-type visas, immigration
compliance/employer sanctions (Form I-9 Audits) and U.S. citizenship. In all
three offices, our firm stands committed to continue to serve prompt, honest,
individualized counsel for federal immigration related services.

Our
membership with the Aventura Marketing Council will allow us to interact with
other people in the business/legal communities and build upon the strong
relationships we already have in the area. This will afford us the opportunity
to brainstorm with our colleagues on the best ways to guide our constituencies. 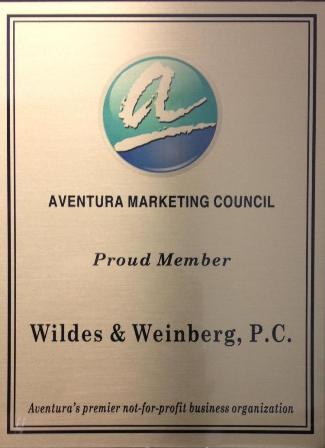 Photo:
Wildes & Weinberg P.C. Paralegal Corrine Durso Joins AMC Event in Miami: Originally from Queens, New York, Corinne moved
to Florida this past September after working in the firm’s New York and New
Jersey offices for nearly three years.  Corinne has a Masters in Psychology
from St. Johns University,  is a certified paralegal from Queens College,
and has significant expertise in O-1 visas,  particularly in the
arts, EB1s, H1Bs, I-9 compliance, and adjustment of status applications. 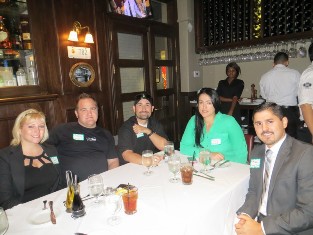