On April 10, 2014, Wildes & Weinberg, P.C. Managing Partner Michael Wildes, and Paralegal Corinne Durso took a quick respite from the office to join other Aventura Young Professionals for a quick networking event at Buffalo Wild Wings. The event was sponsored by The Aventura Marketing Council for the area’s young professionals. 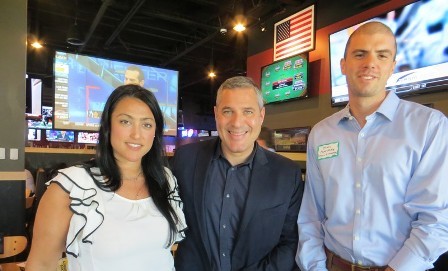 Pictured alongside Michael and Corinne is Marc E. Narotsky, Esq., a certified civil and family mediator and qualified arbitrator. Marc is also a candidate for Aventura City Commissioner and was excited to learn from Michael Wildes the key to running a successful law firm while simultaneously running for office and engaging in community service as Michael served his hometown of Englewood, NJ as a two-term city councilman and two-term mayor.
Moreover, Michael has become nationally recognized in the Democratic Party as a leading fundraiser for congressional and senate candidates throughout the United States—including Senators Hillary Clinton, Edward Kennedy, Joseph Lieberman, and many others. Senator Kennedy even said that he has “high expectations” that Michael Wildes will join the United States Congress at some point in the future. The Democratic Leadership Council (DLC) voted Michael one of their “100 National Up and Coming Leaders to Watch.”
In addition to many other accomplishments in this young professional’s life so far, Michael is a  former Federal Prosecutor with the United States Attorney’s Office in Brooklyn, has testified on Capitol Hill in connection with anti-terrorism legislation and is internationally renowned for his successful representation of several defectors who have provided difficult to obtain national security information to the United States. He is legal commentator/analyst for network television, was appointed by the President of the United States to the District Appeals Board of the Selective Service System for the State of New Jersey, has been a  certified EMT with Hatzoloh Volunteer Ambulance Corps in New York for over 22 years, served with the Englewood Volunteer Ambulance Corp (EVAC), walked “the beat” for 10 years with the NYPD as an Auxiliary Police Officer and is also an Adjunct Professor of Business Immigration Law at the Benjamin N. Cardozo School of Law in New York City.
The firm’s Miami office concentrates exclusively in federal immigration and nationality law and is capable of handling the needs of institutional and corporate clients, as well as all individual and family-based immigration matters.
Both Michael and Corinne enjoy the interaction they have with the other members of The Aventura Marketing Council as it allows them to network with and build strong relationships with other like-minded business and legal professionals.