Wildes & Weinberg, P.C., Managing Partner and Former Mayor of Englewood, NJ, Michael Wildes, provided introductory remarks on behalf of Our Soldiers Speak, In Partnership with the Federalist Society, at The Benjamin N. Cardozo School of Law, November 11, 2014.  The  purpose of the evening was to discuss the legal challenges in Asymmetric Warfare between Democracies and Non-State Actors.

Our Soliders Speak was established by Sgt. Benjamin Anthony, as a non-governmental, not-for-profit organization that convenes seminars and information sessions pertaining to the Israel Defense Forces (IDF).  The Federalist Society was founded on the principles that the state exists to preserve freedoms and truth. Prior to introducing the guest speaker, a high-ranking Lt. Colonel from the IDF, Dr. Eran Shanir-Borer– Mr. Wildes spoke of his experience as the Mayor of Englewood, New Jersey from 2004 through 2010.  He reminded the attendees of his attendance at the Jerusalem Mayors Conference and encouraged them as future leaders and decision makers  to not only promote the Jewish State but to study its rich military history, heritage and democratic legacy. 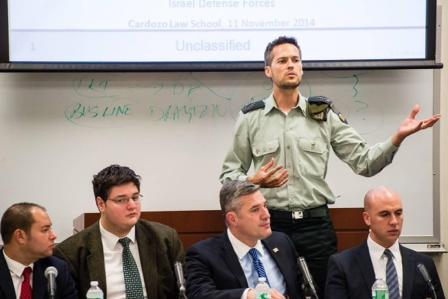 Founded in 1960, Wildes & Weinberg continues to be a leading U.S. Immigration and Nationality Law Firm servicing the needs of individuals as well as prominent American and International organizations in connection with the U.S. immigration requirements of their foreign national personnel. The firm’s multi-lingual staff is spread throughout its New York City, Englewood, NJ, and Miami, FL offices. In addition to being the firm’s Managing Partner, Michael also serves as immigration Counsel to Lincoln Center and two international corporate law firms, and is an Adjunct Professor of Business Immigration Law at Cardozo, his alma mater. A former Federal Prosecutor with the United States Attorney’s Office in Brooklyn (1989-1993), Michael has testified on Capitol Hill in connection with anti-terrorism legislation and is internationally renowned for his successful representation of several high profile defectors, whistle blowers and cooperators. Having represented the United States government in immigration proceedings, Mr. Wildes is a frequent participant on professional panels and commentator on network television and radio with regard to immigration law, employer sanction work and compliance. 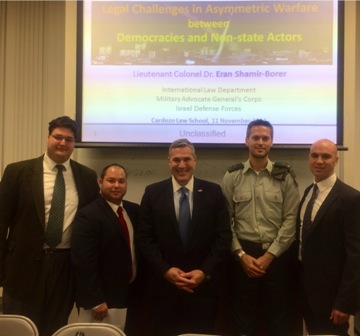 I am honored speak here today for Our Soldiers Speak, In Partnership with the Federalist Society recognizes the importance of retaining  the current state of the legal order and strong and open lines of communication between Israel and Diaspora Jewry. Particularly, in today’s climate, the most committed Israel supporters have questions surrounding Israel and the actions of the Israel/Palestine conflicts, the Israel Defense Force, and the sociopolitical and cross generational effects the resulting consequences can have.

Providing those answers through clear communication, along with the provision of facts, evidence, and precedent is one of the main reasons I am so supportive of this program, which is able to ensure that the questions of many can be addressed and the commonality between the citizens of Israel and Jewish communities locally and abroad can be highlighted and preserved. Here, especially at prestigious universities there is no greater audience than our students—future leaders and decision makers with the power to not only promote, but maintain awareness, understanding, and importance of our storied background, rich heritage, and the issues we face in our homelands abroad with respect to the current socio-political climates, which have been anything but tepid in our history.

The Federalist Society was founded on the principles that the state exists to preserve freedoms and  that it is emphatically the province and duty of the judiciary to say what the law is, not what it should be.  The Society seeks both to promote an awareness of these principles and to further their application through its activities. It recognizes the urgent need to continue to expand these presentations in the United States as reach as many student and young professional minds as possible—as it is critical that the truth about the Israeli-Arab conflict be communicated and that people become educated about the issues involved in order to reduce the violence induced by misunderstandings and false portrayals of the media. Together with Our Soldiers Speak and  our talented  speaker this evening, We wish to encourage an educated dialogue to promote peach in the Israel-Palestine region and around the world. I met Benjamin Anthony in my synagogue: he has the character and capacity to rivet and enrich his audiences.

ISRAEL AS WE KNOW IT:

Israel as we all know remains the object of a bitter terrorist campaign; fundamentalist Islamic groups continue to plan and dispatch suicide bombers to infiltrate Israeli public places with the aim of debilitating society, destroying the economy and demoralizing our people. But after all is said and done, none of this has actually taken place. Yes in the height of the intifadah, tourism was down and the economy suffered but thank God, it is now growing once again. Flights are filled, hotels are fully booked and the streets were filled with tourists. The overall level of violence and terror has been dramatically reduced within the last few years. Just to give you a sense, at the height of the intafada just a few years back, in one month, there were 9 suicide attacks in Israel killing 85 Israelis and now, months go by with no news. And no news is good news. the questions is: how has Israel accomplished this? How, in such a relatively short period of time, has Israel so dramatically reduced the level of violence and terror? The whole world plagued by the same terrorism recognizes the incredible accomplishments of the Israelis and even tries to learn from them. The United States continues to send in military specialists into Israel to learn from the Mossad, the Shin bet and the IDF. But how has Israel, a dramatically smaller country, beset by even more terrorism than the United States, managed to get a handle on the situation?

Despite the fact that Israel is the 100th smallest country in the world with less than 1/1000th of the world’s population, it has the fourth largest air force in the world (after the U. S, Russia and China) with Israeli air force pilots who are second to none.

Israel developed the cell phone and most of the Windows operating systems. The Pentium MMX Chip technology was designed in Israel as well as the Pentium microprocessor in most of our computers. Voice mail technology was developed in Israel as well as the technology for AOL Instant Messenger. Israel’s $100 billion economy is larger than all of its immediate neighbors combined and it has the highest percentage in the world of home computers per capita w/ the highest ratio of university degrees to the population in the world.

Israel produces more scientific papers per capita than any other nation and has the largest number of startup companies than any other country in the world. Apart from Silicon Valley here in the US, Israel has the highest concentration of hi-tech companies and is no less impressive in the area of medical technology. Israel developed the first ingestible video camera, so small it fits inside a pill and is used to view the small intestine from the inside to detect possible disease or illness. Israeli scientists also developed the first fully computerized, no-radiation, diagnostic technology to detect breast cancer. Israel leads the world in the number of scientists and technicians in the workforce per capita. And relative to its population, Israel is the largest immigrant-absorbing nation on earth. In 1984 and 1991, Israel airlifted a total of 22,000 Ethiopian Jews who were at risk in Ethiopia, to safety in Israel and over the last number of years absorbed over a million Jews from the former Soviet Union. Do you know what that is for a 5 million population to successfully absorb another million people?

And all of this is happening while engaged in regular wars with an implacable enemy that seeks its destruction and an economy which is continuously under strain by having to spend more per capita on its own protection than any other nation on earth. No doubt Palestinians and Israelis to attempt a fresh start at achieving peaceful coexistence. All this while navigating friendships with former enemies with competing duplicitous interests.

As a Former Mayor and in my practice as an Immigration Attorney with a variety of Jewish clientele, I am in a privileged position to keep my finger on the pulse of our community, and the current issues we face. As most Second Gen Jewish Americans like myself, we are children and grandchildren of Holocaust survivors, affected by the psychological trauma of the atrocities that occurred on our people, which remains palpable long after we are gone. From both personal and professional experience, I can say confidently that while trauma can be transmitted across the generations, so can resilience. Resilient traits – such as adaptability, initiative, and tenacity – that enabled survivor-parents to survive the Holocaust have been passed on to their children and proves to be the main ingredient, that very special DNA that Israel has been built on. I saw this firsthand when I attended a terrorism conference in Jerusalem as a mayor and later and in 2009  I worked hard to keep: Muammar Qaddafi, the Libyan leader, from sleeping in  a Bedouin styled, air-conditioned tent that he would uses to greet visitors, to be located in Englewood.

I have never taken a plane ticket to Israel for granted. We are facing a new normal: In recent months we learned about Terror Tunnels and the advance of ISIS. We all hear rumors m of the potential prosecution of IDF Generals in Europe and see the dastardly rise of European Anti Semitism. As with Federalist Society. we need to constantly reorder our priorities within the legal system to place a premium on individual liberty, traditional values, and the rule of law.  We must all strive at best to understand Israel’s Military and Strategic Perspective: Israel’s policy of targeting terrorist leaders coupled with its stellar efforts to preserve life and humanity.

No better individual can present the IDF’s case to achieve these goals to tomorrows lawyers, judges, law students and professors than Lieutenant Colonel Dr. Eran Shamir-Borer