On January 31, 2012, Managing Partner Michael Wildes addressed the Pre-Law Society at Yeshiva University, presenting his expertise on managing a law firm and running for office.

His presentation, entitled “Running for Office and Running a Law Firm: The Good, The Bad, and The Ugly”, was supported by Yeshiva University’s Office of Pre-Law Advisement and was well-received.

As Managing Partner of Wildes & Weinberg P.C., Michael Wildes is in the perfect position to provide a realistic and in-depth view of running a highly successful law firm. With offices in New York City and New Jersey, Michael’s management role is no easy task but with years of experience under his belt he was happy to give plenty of useful pointers to the Pre-Law students at Yeshiva. Michael also provided his perspective on running for political office. Michael Wildes is a former Federal Prosecutor with the United States Attorney’s Office in Brooklyn (1989-1993) and has testified on Capitol Hill in connection with anti-terrorism legislation. He also teaches immigration law at Yeshiva University’s Cardozo School of law.  As a renowned legal analyst for network television, he is recognized most recently for his frequent comments and discussions concerning terrorist threats facing the United States. Michael Wildes is also the former Mayor of his hometown of Englewood, New Jersey, serving in office there from 2004-2010.

The students had many insightful questions for Michael and appreciated the opportunity to receive guidance on their future careers. Michael spoke passionately about pursuing careers in law and/or politics with commitment and fervor, always happy to provide inspiration to the lawyers and politicians of our future. 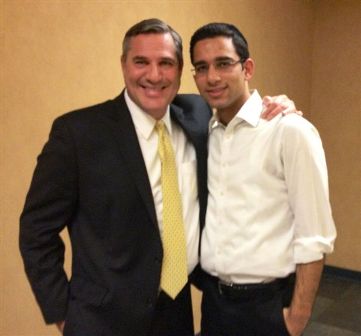 To view a flier for the event, please click here.