On Wednesday evening May 22, 2013 Wildes & Weinberg, P.C. Managing Partner Michael Wildes attended a VIP private cocktail party hosted by Steve Forbes, Chairman and Editor-in-Chief of Forbes Media.  The evening was well attended by top-level business leaders and dignitaries and served as a formal introduction to the American Society of the University of Haifa, the largest comprehensive marine research university in northern Israel. For over 40 years, the goal of the American Society is to help ensure the continued excellence of the University’s educational, research, and community activities. Exploring Israel’s new offshore gas reserves, studying marine and plant life; and the launching of their new Mediterranean Center were chief among the topics discussed. 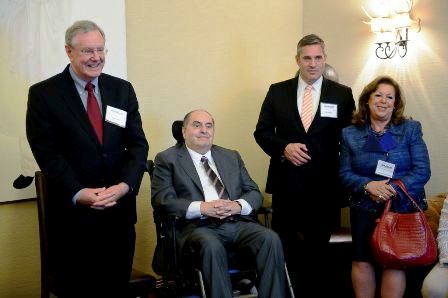 Photo Caption: (l to r) Steve Forbes; Leon Charney; Michael Wildes; Francine Holtzman
The firm is no stranger to supporting and representing Universities. Michael Wides has been lecturing extensively on U.S. Immigration Law to universities, corporations, non-profit and social organizations, other law firms, immigration municipalities, and to the public at large for many years.  His lectures are free of charge and intended to increase public understanding of immigration laws and how to remain in compliance.  His presentations have been well received throughout the metropolitan area as he was  previously presented lectures at such noteworthy institutions as Yale University, Yeshiva University, Pace University, Berkeley College, The New School, and organizations such as the American Immigration Lawyers Association, and Weichert  Realtors.
Wildes takes his civic and philanthropic responsibilities seriously.  He served as chair of the American Jewish Congress’ Committee on International Terrorism, is a Member of the Board of Directors of Boys Town of Jerusalem,   a certified EMT,] and a Member of the Hatzoloh Volunteer Ambulance Corps in New York; and he served over 10 years (1982-1992) with the NYPD as an Auxiliary Police Officer; Nearly 4 years as a Federal Prosecutor (1989-1993); and was a two-term City Council Member and two-term Mayor of Englewood, NJ (2001 -2012). 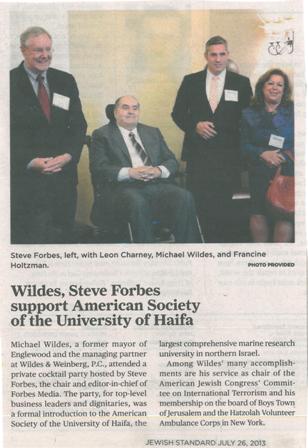