On February 4, 2016, The Cathedral Club of Brooklyn celebrated its 116th anniversary dinner at the New York Marriott Marquis.  The Club has been supporting the Bishop’s charitable endeavors for more than 100 years. The evening honored guest of honor, Attorney Donald DeCarlo, chairperson of the Amtrust International Underwriters Group and the former vice chair and commissioner of the New York State Insurance Fund. Former New York State Assemblyman and now New York State Comptroller Thomas DiNapoli was scheduled to be the keynote speaker. Master of Ceremonies for the event was Q104.3 FM Radio host Jim Kerr. Bishop Nicholas DiMarzio is the club’s spiritual director.

Michael was the invited guest of The Cathedral Club President Vincent LeVien who serves as Director of External Affairs for DeSales Media, the parent company of The Tablet and NET-TV. 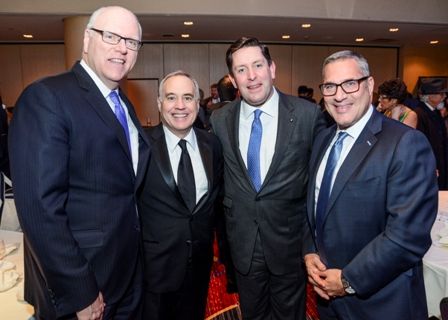