The Investigative Management Group, a leader in the high-end investigative market, organized a continuing legal education breakfast and presentation regarding active shooter awareness in the workplace and schools in light of recent national tragedies. Thomas A. Petro, Former Special Agent, United States Secret Service offered guidance on employer awareness training and the importance of establishing policy and procedures to create a safe work and school environment. 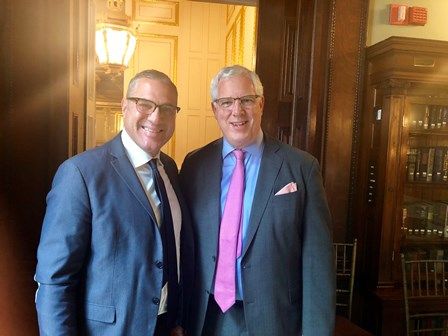 A community activist since the age of 14, Michael Wildes was an auxiliary police officer with the New York Police Department, a member of Community Board 6, a member of the Local Claims and Adjudication Board of New York State, and a candidate for Democratic District Leader of the 28th Assembly District of New York State. From 1989-1993, Michael  was a Federal Prosecutor for the United States Attorney’s Office in Brooklyn. Moreover, Michael also served  two terms (2004-2010) as the Mayor of Englewood, New Jersey, where he recently won the democratic primary for Mayor once again,  was appointed to the District Appeals Board of the Selective Service System for the State of New Jersey, was a member of the New Jersey Governor’s Blue Panel on Immigration, and has been a guest lecturer at many distinguished forums and institutions including Yale University, New York University, Brooklyn Law School, and The Benjamin N. Cardozo School of Law, where he is also an Adjunct Professor of Business Immigration Law.

Wildes & Weinberg, a boutique law firm specializing exclusively in the practice of U.S. immigration and nationality law, was founded in 1960 by Michael’s father and the firm’s  Senior Partner Leon Wildes, whose best-known accomplishment was his successful representation of John Lennon in his widely publicized deportation proceedings, the circumstances of which have inspired several films, books, and documentaries.

In addition to running a highly successful immigration law practice, Michael is also of counsel to Lincoln Center for the Performing Arts and two international/corporate law firms, has testified on Capitol Hill in connection with anti-terrorism legislation, and is a frequent participant on professional panels and commentator on network television and radio with regard to US immigration law, employer sanction work and compliance.