PICTURED WITH MICHAEL ARE COLLEAGUES AND HIS OWN OLD PROFESSORS FROM WHEN HE ATTENDED THE LAW SCHOOL: (L TO R) PROFESSORS BURT LIPSHIE,  MICHAEL HERZ,  STEWART STERK, AND CHARLES YABLON. OCTOBER 2017. 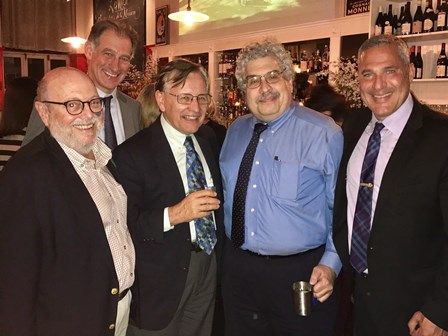 Founded in 1976 by Yeshiva University, the Benjamin N. Cardozo School of Law has a national reputation for a top-caliber faculty and an innovative academic program that includes a wide range of exciting and practical opportunities

Prior to joining Wildes & Weinberg, Michael was a former Federal Prosecutor with the United States Attorney’s Office in Brooklyn (1989-1993).   Mr. Wildes also served as a two-term City Council Person as well as a two-term Mayor of Englewood, New Jersey, where he resides.  In addition, Michael often appears as a legal commentator/analyst for network television and radio.