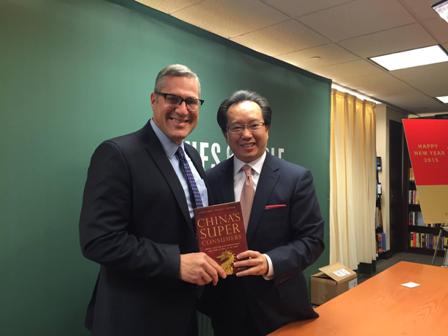 Mr. Chan’s recent book, China’s Super Consumers, What 1 Billion Customers Want and How to Sell it to Them, discusses how China has transformed itself from a feudal economy in the 19th Century to Mao and Communism in the 20th Century, to the largest consumer market in the world by the early 21st Century.  In addition to being a writer, Mr. Chan is a pre-eminent expert on US-China partnerships and building loyalty with Chinese luxury consumers. He serves as President and Chief Executive Officer of US China Partners Inc., a consulting and advisory firm that helps organization designs and implements their China consumers’ strategies. He spent two decades as a consultant on market entry, cross-border M&A and joint ventures partnership innovation with some of the largest and well-known global luxury and consumer brands, Fortune 500 and Chinese large State-Own and private companies.

Moreover, Mr. Chan is frequently featured in interviews and articles in the New York Times, Forbes, Chief Executive Magazine and China Daily News. Savio serves as a member of National Committee on US-China Relations and advises many ultra-high net worth legacy families in both the US and China. He is a frequent keynote speaker and panelist at various business and technology events including the Conference Board, Microsoft Technology Conference, Columbia China Conference and Wharton China Business Forum.

Wildes & Weinberg, P.C.  was established in 1960 by Senior Partner, Leon Wildes. Over more than half a century, the firm has concentrated its practice in all aspects of U.S. immigration and nationality law, servicing the immigration needs of prominent American and International firms, banks, industrial, financial and manufacturing concerns and law firms in connection with the personnel needs of their foreign national employees.

In addition, the firm has a distinguished clientele and has done substantial immigration work for performing artists, directors, writers, models, actors/actresses, athletes, fine artists, art dealers, curators, and literary agents. Most notable was Wildes’ successful representation of former Beatle John Lennon and his artist wife, Yoko Ono in their deportation proceedings, the basis of which has inspired legislation, and has been portrayed in films, plays, and literary works worldwide.

Despite difficulties currently being encountered in dealing with U.S. immigration authorities, the firm has maintained an extraordinary track record for success in its cases.  In addition, Wildes & Weinberg’s multilingual staff is spread throughout its three offices, New York City, Englewood, NJ, and Miami, FL, and are known for their experience and special expertise in processing each foreign national’s case with nothing less than the highest level of professionalism.