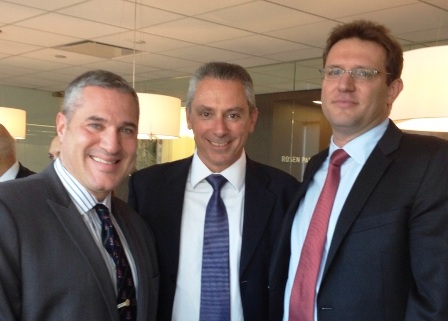 In connection with The American Council for World Jewry and The American Jewish Congress, Managing Partner Michael Wildes attended an intimate luncheon with Mr. Alon Ben David, Senior Defense Correspondent for Israel’s Channel 10. The event, which was hosted by Jack Rosen a New York real estate magnate, at the offices of Rosen Partners LLC,  served as the forum for an off-the-record discussion of the recent war between Israel and Hamas, focusing on the US role in the region as well as ISIS/ISIL, and the potential chance of peace. Mr. Ben David has been covering Israel’s wars and the Middle East for the last three decades.

Founded in 1960, the firm of Wildes & Weinberg, is considered the preeminent U.S. Immigration and Nationality Law Firm and has offices throughout the U.S. in New York, New Jersey, and Florida. In addition to servicing the needs of individuals as well as foreign corporations, Managing Partner Michael Wildes often appears on network television and radio in connection with U.S. immigration and other legal matters and is an Adjunct Professor of Business Immigration Law at The Benjamin N. Cardozo School of Law in New York City.

The firm, which is known for its experienced and multi-lingual staff, concentrates its practice in all aspects of U.S. immigration law including but not limited to employment and investment-based  immigration, work permits, permanent residence for qualified individuals, family-based immigration, asylum applications, all temporary and permanent type visas, Form I-9 compliance, naturalization, and  processes each matter with nothing less than the highest level of professionalism.